Join the hustle and bustle of Wild Bazaar, full of exotic spices, books, bric a brac, carpets and colourful fabrics just waiting for someone to haggle their way to some fantastic rewards! Wild Bazaar is one of NetEnt’s most recent releases, and while it doesn’t have the plethora of bonus features and free spins we so crave, there is plenty to keep you busy, and lot’s to wrap your head around thanks to four different Wilds!

Wild Bazaar is a five reel game set amongst an Arabian market. We’re not sure how authentic this is supposed to be but the design certainly has plenty of fun and excitement about it. Shiny trinkets and gems fill the reels along with four treasure chests each with a hidden Wild inside, but more on those in a bit! 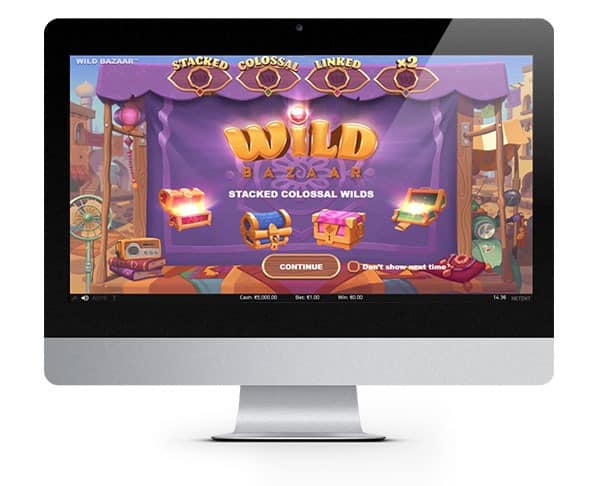 The sounds of the bustling marketplace fill your ears as you spin the reels hoping to pick up a bargain or two! The five-reel game features 26 fixed bet lines. Only the highest bet line is paid with wins calculated from left to right.

The board is set within a market stand surrounded by various paraphernalia and odds and ends. On top of the reels, you’ll notice the four different Wild descriptions. These will light up depending on which Wilds you have triggered. It can be one, two or a combination of all of the Wilds. Just think of the possibilities!

As with the majority of NetEnt’s video slots, you can toggle the bet level and coin value to suit your needs. Decide ahead of playing how much you’d like to gamble and then stick with that. From there you can decide what you’d like your stake to be. You can play this game from anywhere between £0.20 per spin up to a whopping £400 although that seems pretty excessive for this game!

The coin value can be adjusted to between 1 and 10 with it increasing 20 coins per level. You can then amend the coin value. You will be shown the value of each bet clearly at the base of the reels, so there are no nasty surprises!

Overall, Wild Bazaar is a fairly simple game, and it doesn’t offer a free spins feature in the standard sense. The gameplay is very much centred around the various wild features that can be triggered and how they can interact and combine to create some decent wins.

The treasure chests are the four most important symbols in the game. As they appear they can trigger 1 of 4 Wild Spins Features. Here’s what you need to know: 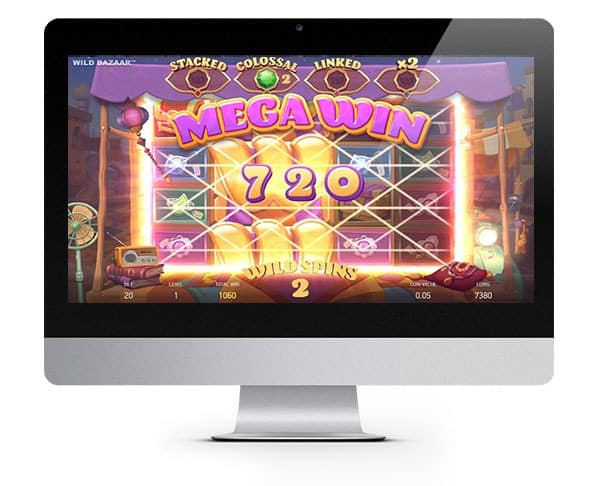 While Wild Bazaar has plenty of charm, it lacks the wow factor we have come to expect from NetEnt. The various different wilds add to the gameplay and can create some good opportunities for decent wins, but we can’t help but feel it’s missing something.