Quickspin games are pretty easy to come by thankfully. Quickspin is fast becoming one of the industry’s best-loved developers with a growing collection of games that are filled with fun features.

If you are looking for a reliable and trusted casino to try out Warp Wreckers Power Glyph, why not start with some of our casino recommendations below?

Quickspin games are pretty easy to come by thankfully. Quickspin is fast becoming one of the industry’s best-loved developers with a growing collection of games that are filled with fun features. If you are looking for a reliable and trusted casino to try out Warp Wreckers Power Glyph, why not start with some of our casino recommendations below? 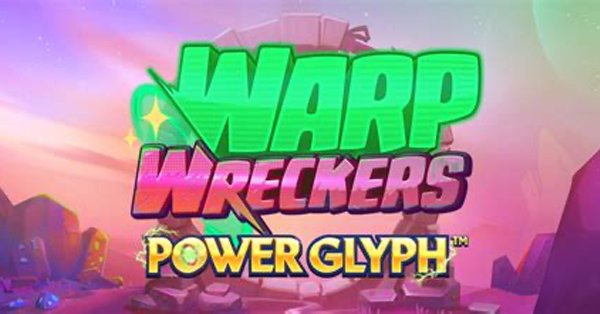 Warp Wreckers Power Glyph is a colourful and fun game from the Quickspin studios. The game looks pretty straightforward but there is a series of Power Up symbols that can change the course of the game dramatically with added wilds, transforming symbols and warper symbols! With an increasing multiplier and tumbling symbols, the game can quickly kick into action! But as quick as those wins can come, the game can be disappointing too with highly volatile gameplay.

Open up the slot game and you are met with an intergalactic landscape where you are introduced to some of the game’s main features. These include the Power Glyph and free spins. You’ll also see the main characters of the game, three colourful space dudes. The game also boasts a win potential of up to 4500 x your stake. 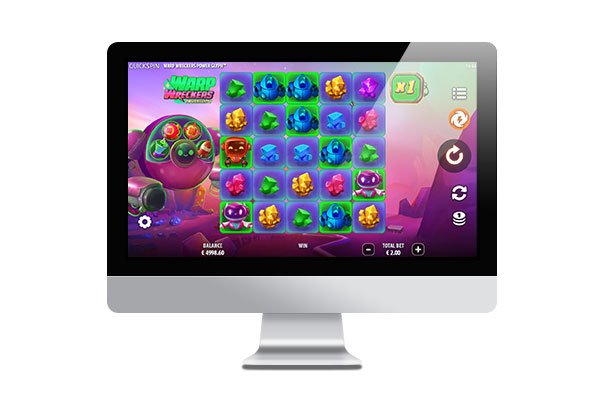 Click ‘start’ to open up the main game grid which features a square 5×5 layout. The symbols on the reels include the different space travellers who make up the main characters in the game and a series of coloured crystals. The aim of the game is to get at least three matching symbols in a row either vertically or horizontally. It’s a little odd as it looks like it should be a cluster wins game but wins need to be formed in a line.

For the wins that you form, any symbols that are part of that win will disappear and the symbols above will drop down in the spaces below hopefully triggering another win when further symbols will disappear also. The idea is that you clear the grid entirely to trigger free spins, but we will get into that in a bit more detail in our game features section below. The main feature of the game is the Power Up stack which is filled with Power Up symbols that can transform symbols, erase symbols, add wilds and much more.

Before you start playing, set the game’s bet size to your preferences ensuring you are happy with the stake size. The default bet is set to €1 but the game can be played from 0.20 up to €100 per spin. You can toggle the bet size using the +/- buttons below the reels. Once you are happy you can start playing.

Wild symbols can appear during the main game and free spins and substitute for all symbols except the Power Glyph symbol. Wilds can appear at the centre of a crystal or wild symbol win of 3 or 5 symbols.

The Power Glyph Wild symbols substitute for all symbols. Power Glyph Wilds are created at the centre of robot symbol wins of 3 or 5 symbols. Any Power Glyph symbol that forms part of a winning combination will activate the next Power-Up in the stack.

The Power Up Stack can be seen to the left of the reels inside the red spaceship and is filled with 4 random Power Up Symbols. During free spins, the four random symbols are joined by an extra symbol, ‘The Destroyer’.

When a win occurs with a Power Glyph, the next Power Up symbol in the stack is activated. When no more wins occur, any active Power Up symbols are consumed one after another.

The available Power Up symbols include:

The Multiplier starts at 1x and increases by one with every win. The multiplier won’t reset during free spins. Wins will be multiplied by the current value.

The game has an RTP of 96.29% and is classed as very high volatility.

Yes, 6 free spins can be triggered when a player clears the board of all symbols.

This game has a fun concept but it’s also pretty frustrating to play. So many times we got so close to clearing the boards with just a few symbols left only to have to start all over again. This game is super high volatility and it shows!