NoLimit City is coming in all guns blazing in their new western-themed slot game True Grit Redemption. Expect extreme volatility and plenty of twists and turns thanks to the many features of the game including their signature xWays mechanics.

Test your grit in NoLimit City’s new online slot game True Grit Redemption. The stakes are high and volatility even higher, do you have the mettle to take this game on? Only one way to know, play the game at one of our hand-picked online casinos for the best experience. 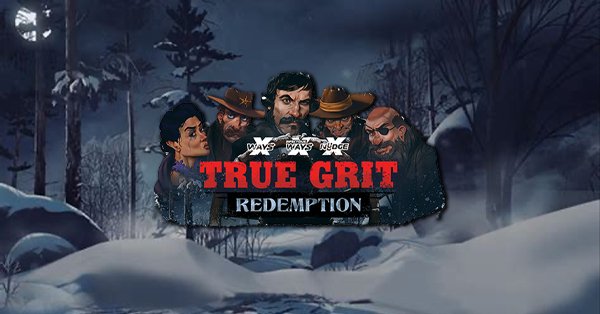 True Grit Redmetpion is the new 2022 slot from NoLimity City and true to form, it’s a gritty little number that fans of their games are going to love. This is no cheesy spaghetti western, its rich graphics and dark and edgy characters set the scene for a dramatic and suitably exciting game. As with all NoLimit City slots, expect extreme volatility! The game has a maximum payout of 20,220x which can be won once in every 6 million spins on average.

NoLimit City knows how to pack a game full of features and that’s exactly what they’ve done here with True Grit Redemption. Regulars will already be well versed in their xWays features so will know the score and the kinds of outcomes that can be created when these mechanics are built into a game. It’s a wild ride!

True Grit Redemption has a dark and sinister feel, this is no Wild West town you would want to wander into! With the fearsome faces of the characters in the game and the dark and moody backdrop to the town that sits behind the reels, NoLimit City knows how to harness our emotions and build intensity in their games! 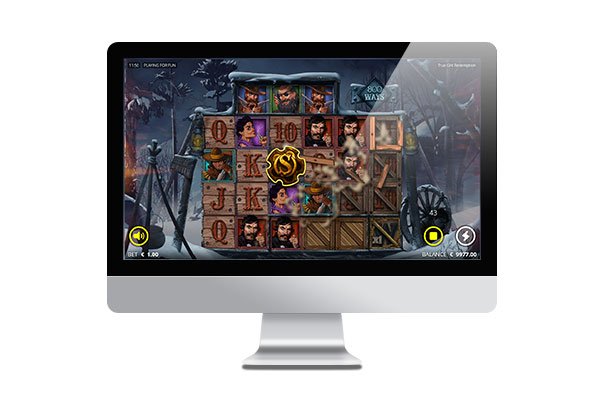 As the game loads up, the opening screen scrolls through each of the game features (there are a lot of them). Dead Spins, Tortune Spins and XWays. From here you can choose to toggle the sound on or off. We’d suggest leaving it on at least for the first few rounds as it really helps to build up the tension in the game and set the scene. Click on continue to open up the game board.

The game grid features 6 reels and 4 rows with an additional three symbol spaces above reels 2, 3 and 4. The symbols are made up of lower value letters and numbers which are sat within wooden pallet boxes. There are also the five members of the crew, the sinister faces of Lily, Chapo, Austin, Wet Dog and Boss which make up the higher value symbols.

One of the higher paying symbols to watch for is Grit Girl. Grit Girl can appear on reels 1, 2, 3 or 4 and can payout 25x or even 100x your stake. Wins from Grit Girl will also be multiplied by the sticky wild multiplier at the bottom of the reel. For more detail on the game’s features, hop to the next section of our slot review. 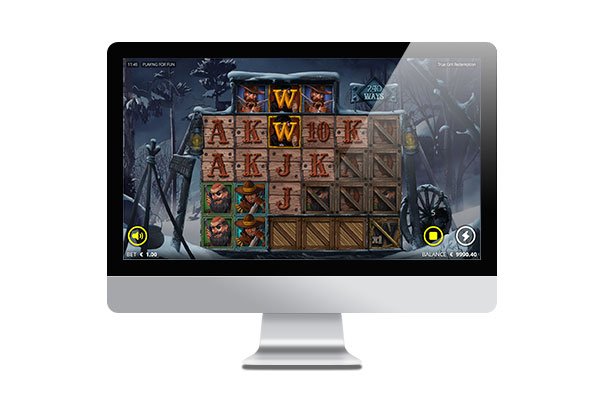 Before you start playing, set your preferred bet level. It will be at the default bet of 1.00 EUR but the game can be played from 0.20 EUR so set it to suit your budget. You can also set the game to autoplay for a specific number of spins so you can just sit back, relax and watch the action unfold!

The game has been created in HTML5 so it can be enjoyed across multiple devices including looking awesome on mobile. It’s also available in multiple languages and currencies depending on which casino you are playing at.

The game has an abundance of features starting off with the grid itself which has three additional symbols on the top of reels 2, 3 and 4. This top reel can only hold the character symbols and wilds. If a symbol in this reel matches one in the main reels below, both symbols will turn into wilds in the Wild Transform feature.

The bottom reel holds four locked symbols which can contain characters and special symbols. The final reel position on the right always holds a sticky wild with a multiplier. This sticky wild will unlock during Dead Spins with an increasing multiplier of x1 with every cascading win.

When a stacked Wild symbol appears in the bottom reel, it nudges to become fully visible in the main reel above. Every nudge upwards will increase the win multiplier by 1x. If the wild does not form part of a win, it will collapse back down and will nudge up again for an increasing wild multiplier in the next spin. If you have several wild multipliers, the wins will be totalled up at the end of the round.

xWays symbols can appear anywhere in the main reels but the Infectious xWays can only land in the bottom reel. xWays will transform into a random normal paying symbol and will reveal between 2-3 matching symbols thus increasing the number of ways to win.

Infectious xWays will reveal just 2 symbols. Once activated, they will infect all symbols on the same reel to expand to the same size. Multiple Infectious xWays can appear at the same time but will only infect a symbol once.

Reel Split can only appear in the bottom reel. Once activated, it will split all symbols above it in the main reels into two. It will then disappear and the bottom reels will shift to the left. Reel Split will not split the Grit Girl symbol, instead, this symbol will double its payout multiplier.

The Grit Girl symbol can only appear in reels 1, 2, 3 and 4 in the main reels and is a pretty cool addition to the game. The symbol pays out as soon as there are 3 or more on the reels. 3 has a base payout of 25x the stake and 4 has a base payout of 500x. Any wins are also multiplied by the number on the sticky wild multiplier in the bottom right symbol position.

Scatter symbols can only land in reels 1, 2, 3 and 4 in the main reels. Landing 3 scatter symbols will trigger 8+ Torture Spins. If a scatter is split, an extra free spin is awarded. If a player lands an additional scatter, the round is upgraded to Dead Spins. This awards two further free spins and an additional free spin for each extra split.

4 Sheriff Badge scatter symbols will trigger the Dead Spins feature. This awards 10 free spins with one extra free spin for any split symbols. Any locked symbol position will be unlocked for the duration of the feature including the sticky wild symbol.

Yes, True Grit Redemption has two free spins features, Torture Spins and Dead Spins. Details of the frees spins rounds and how to trigger them can be found in the game features section of our slot review.

NoLimit’s True Grit does indeed have all the grit and edginess that we have come to know and love from a NoLimit City slot. The game is, as ever, packed with incredible features and a dynamic top and bottom reel which can determine what happens on the main reels and create some awesome results including big multipliers and more ways to win.