Ahoy me hearties, step onboard the good ship Treasure Skyland and spin your way to some wins with the help of these pirate monkeys! The only way is up with this new Just for the Win slot!

This latest game from the Just for the Win studios brings to life a motley crew of treasure seekers.

Treasure Skyland features a group of high flying monkey pirates (yep, really)! These monkeys have brought with them a stack of features including an aptly named ‘Feature Reel’ which can be randomly triggered and delivers a series of different features including Multipliers, Symbol Upgrades, Win Extend and Symbols to Wilds! We will cover these in more depth in our ‘Game Play’ section below. 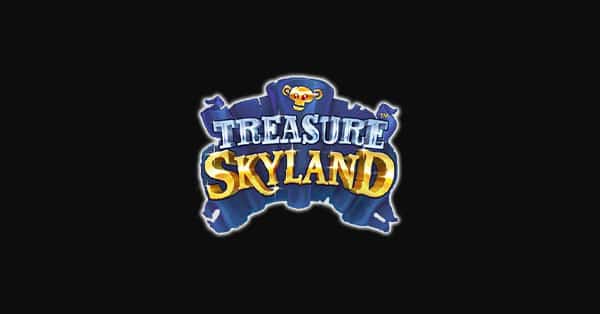 Just for the Win is a premium independent gaming studio that has been rocking out some excellent content recently! Their quirky themes mash up all manner of random genres, plus they always have an interesting twist on popular themes that we haven’t seen before. Their unique games offer something you won’t find everywhere, which is one of the many reasons they are one of the hottest software developers at the moment!

Play Treasure Skyland ™ and other Microgaming slots at these casinos:

We have sifted our way through hundreds of online casinos to bring you the very finest casinos and free spins bonuses. Why not check out some of these me hearties:

Tropical tunes play as you open up Treasure Skyland. We have seen plenty of monkeys on pirate ships before but not ones that take to the skies! It’s a classic move by Just for the Win to do something unexpected with this game and there are plenty of twists to keep things interesting too!

The 5×3 reel game has an attractive cloud-filled blue sky backdrop with the reels made up of various symbols including the three Pirate Monkey crew members which make up the higher paying symbols. Different value coins along with letters and numbers A, K, J, Q and 10 make up the rest. There is also the Treasure Skyland logo which is the highest paying of all the symbols which can give you up to 80x your stake with a winning combination of five symbols.

Treasure Skyland has several features which are centred around the Feature Frame and Feature Reel. More on those right here:

Wild – the treasure map wild symbols will appear on reels 2, 3 and 4 and can substitute for all symbols.

Feature Frame – the helm or “steering wheel” as we incorrectly call it, will appear over a symbol at random on reels 2, 3 or 4. Any winning paylines that run through this frame are called “triggering paylines”. This action will result in the appearance of the “Feature Reel”.

Feature Reel – The feature reel is surrounded by a gold frame and appears around the leftmost reel. Once triggered, it will start spinning and land on a feature at random. There are four different features that can be triggered, which include:

Treasure Skyland looks great, and the plinky-plonky tropical sounds create a friendly, relaxing vibe while you play. It’s not the most exciting game we’ve ever played and not one of our favourites from Just for the Win. However, it has some interesting elements to it, which can make a small win into something a bit more appealing!