Tombstone RIP is the latest online slot to be released from one of our favourite software providers, NoLimit City. Play Tombstone RIP slot at one of our hand-picked online casinos: 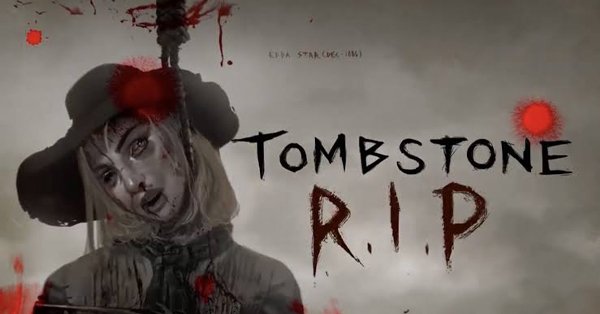 This isn’t your average wild west themed slot game! Tombstone RIP is the sequel to NoLimit City’s Tombstone game and they haven’t held back. With some gruesome graphics, outlandish outlaws, there is murder, hangings, dark humour and blood in this gritty game! It’s not for the faint-hearted but fans of NoLimit City slots will surely love it!

Like most NoLimit City slots, there is no shortage of features to the game so it’s fast-paced with action at every turn. It’s worth having a few free demo spins before you play for real to get a feel for the game’s different features and functions.

Tombstone RIP features all of the tell-tale darkness and edginess that we have come to expect from NoLimit City. They never hold anything back with gritty graphics, menacing storylines and creepy characters! In this sequel to Tombstone, they have laden on the features!

Open up the game and the landing screen gives you a little introduction to the game and you’ll be asked to answer a question to enter the game. Get it wrong and another question pops up! This is a unique intro and totally fits with NoLimit City’s quirky style.

The game screen then scrolls through the various features in the game so you get a sense of the action to come. With so many features, there’s a lot to get through here, but for a brief overview of each of the games’ features, you can head down to the next section of our casino review. 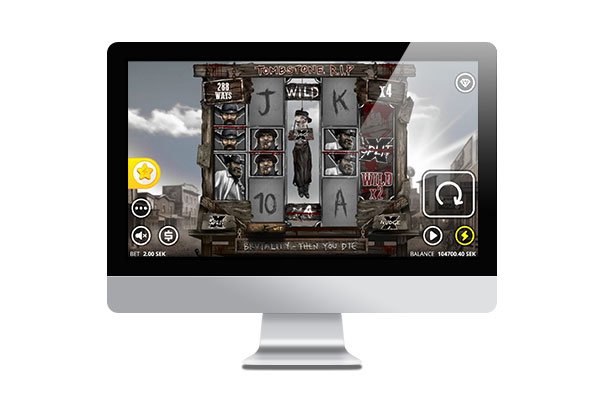 Click on the continue button to open up the game reels. The game features five reels with varying symbol sizes that provide up to 108 ways to win. The reels feature 2, 3, 3, 3 and 1 symbols with the last reel having some unique properties. The reels sit within a weathered wooden frame with a heartwarming message of “brutality – then you die” scratched into the bottom plank.

The spin button sits to the bottom right of the reels and there is also the option to speed up the spin and set the game to autoplay. Click on the dollar sign to set your bet level. This defaults to €1 per spin but the game can be played from 0.10 up to €50 per spin.

Raise the base bet by 10% and RTP to 96.28%. You’ll sacrifice some of the smaller wins in the base game, but increase your chances of triggering the Hang ’em High Free or Boothill Spins features. The Enhanced Bet feature also guarantees a scatter symbol on the second reel.

This is a feature that appears regularly in NoLimit City slots so fans of their games will already be familiar with it. The xNudge symbols can only appear in the middle reels and with each nudge will increase the multiplier by 1x. When part of an xNudge Wild appears on the reel, it will nudge up until fully visible, with each nudge the multiple increases by 1.

The regular Wild symbols can appear in reels 2, 3, 4 and 5, however, the Reel Split Wild can only appear in the middle three reels. If a player lands a Reel Split Wild, it will split itself into two and also the other symbols on the reels, doubling the number of symbols that appear on that reel.

The xSplit Wild symbol can only appear in the last reel and will count as two symbols high. Once it lands it will have an effect on the symbols in all four reels, splitting them into four paths. A path will be selected at random and split. If one of the paths already has a split symbol, it will be split again creating four symbols in that reel position.

When xSplit Wilds splits an xNudge Wild symbol it will double the XNudge multiplier.

Landing 3 Hang ’em High Scatters will trigger 8 free spins. If one of the Scatters is split, it will still only count as one scatter, but if the feature is triggered, an additional free spin is awarded. Landing two Hang ’em High Scatters will convert them into Reel Split Wilds. If a player lands a Boothill Scatter without activating the Boothill Free Spins, it will convert into a Cowboy symbol and award a random multiplier of between x5 and x999.

Landing three Hang ’em High Scatters and a Boothill Scatter will be awarded 10 free spins. The multiplier will increase with wilds as with Hang ’em High Free Spins. For each spin, the Cowboy symbol on the last reel will turn all symbols of that type into wilds. Each spin, a random multiplier will be applied to a Cowboy symbol with between x5 and x999.

Tombstone RIP has a basic RTP of 96.08% but there is a dual RTP set up where this can become 96.28% with the game’s enhanced bet feature.

Yes, the game has two free spins features. The Hang ’em Hgh Free spins can be triggered with three scatters landing during the base game. 8 free spins are awarded at the start of the feature.

Tombstone RIP has all the signature style of NoLimit City with some horrifying graphics and impressive features. The game has more action than a spaghetti western but it comes with more of the risks with a very high volatility game, the big wins won’t come around very often.