The Walking Dead is a huge global TV show with more than a decade of viewership and a massive haul of fans around the world. Playtech has earned exclusive rights to create this incredible online slot game, which turns out, is everything we hoped for and more!

Read our online slot review to find out what to expect from The Walking Dead slot game.

Play The Walking Dead at the following casinos:

Have you got what it takes to survive the apocalypse? Enjoy taking on the Walkers in Playtech’s latest branded slot game The Walking Dead! We have picked out the following casinos where you can enjoy playing this new slot game. 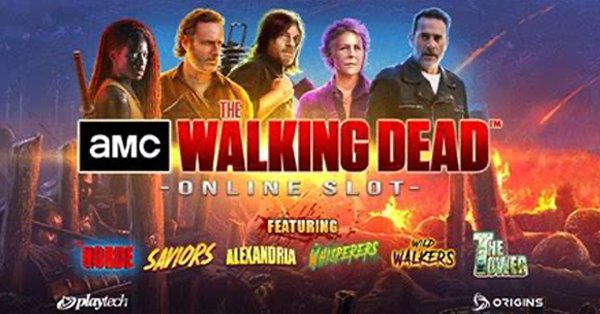 We were pretty excited when we learned that Playtech had secured exclusive rights to produce a range of AMC and WE tv branded titles including none other than The Walking Dead. This was always going to be a hotly anticipated slot launch. With the huge success of the show and so much great content and memorable characters, this game will be a huge hit for Playtech with the benefit of a ready-made audience for the game.

The Walking Dead features all of your favourite characters from the show including Michone, Neegan, Daryl, Carol and Rick. It also has elements from the different seasons including the Horde, Saviours, Alexandria, the Whisperers, Wild Walkers and the Tower which make up the many, many features in the game.

The game itself has a 5×3 setup and sits in front of the background image of Alexandria. The atmospheric music from the show builds the tension ready to start spinning those reels and taking down some walkers!

Before you start, set your preferred bet level choosing from a range of 0.10 per bet up to a whopping €500 per bet. As you toggle the bet amount, you’ll see the grand, major, minor and mini jackpots go up and down. Choose a level you are happy with and also based on your budget for your gambling session. You’ll want to weigh up getting a good session with how much you can win. It’s a delicate balance! 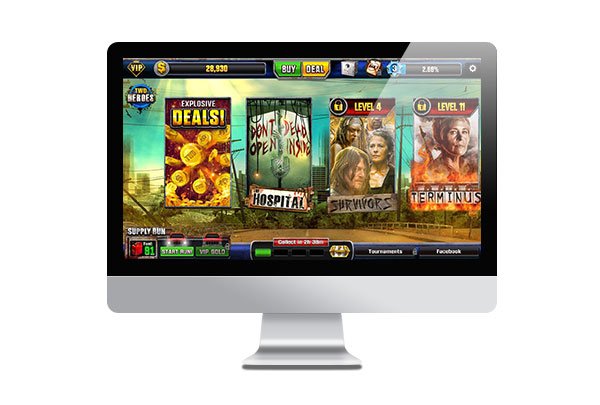 Click on the spin button to start playing or click and hold to set up the autoplay function. You can set the number of spins you’d like to play or set it to stop when the feature is triggered. If you want to speed the game up, you can also do that by switching on the turbo button.

The reels are filled with the big stars of the show, and of course, the ever-present walkers. Each of the lower value symbols also has a little nod to the show with various weapons including Daryl’s trademark crossbow. The main symbols to watch for are the Hand Wild which can substitute for all symbols except the scatter, also the 3 Sheilds Scatter which triggers the free games feature. Other important symbols include the Coin which can be collected to trigger The Tower feature, the Key Coin that kicks in during that feature as well as the biohazard sign coin.

The Walking Dead has some really great features, which if you can trigger them, could create some pretty apocalyptic wins! The game has a huge amount to unpack with six different features, so get comfy and let us take you through each of them in turn.

One of the more interesting and potentially fruitful features in the game is The Tower. It can deliver multiple cash prizes and also give you access to those all-important jackpots.  This feature can be triggered by landing six or more of the coin symbols. The coins will then lock in place and 3 re-spins are awarded.

The free games are as follows:

During The Horde free game, every wild or coin symbol that lands on reels 2, 3 or 4  will expand to fill the entire reel.

During the Saviours free games feature, any wilds or coin symbols that land in reels 2, 3 or 4 will be awarded a random multiplier. Each symbol will have its own multiplier that will be totalled up and applied to your win.

During The Whisperers free game feature, three special reels will be selected at the start of each spin. These special reels only contain wilds and coin symbols.

During the Wild Walkers free game feature, each time a full stack of wilds appears on the reels they will transform into wild walkers and will trigger the respins. During respins, free games will freeze so you’ll still have the same amount after the respins.

The RTP of the game is 95.73%. The game is classified as medium volatility.

The game doesn’t feature a standard free spins feature but has no less than five individual free games, each with its own special elements including stacked wilds, respins, multipliers and much more. For a detailed breakdown of the free games, take a look at our ‘Game Feature’ section above.

For fans of The Walking Dead series, this game is a must. It will appeal to many slots fans for the unique and extensive features list. The Tower feature can really payout if you can unlock each of the reels. It has potential for some big cash prizes and is probably our favourite part of the game as you really feel like you get value from it as the feature can last a long time and payout pretty well. But you’ve got to trigger it first of course!