Welcome to The Grand, a glitzy and glamorous new slot from Quickspin that opened its doors to the world on March the 12th this year.

The Grand has a sophisticated art deco design and has elements of The Great Gatsby about it. The high volatility slot is a little different to what we’ve seen from Quickspin in the past, but they are always a developer we expect to do the unexpected! There are combinations of features and synced reels, random wilds, free spins and more!

At The Grand, everything is about luxury and ensuring everyone has a five-star experience. The game designers have included features that will keep gameplay exciting especially for those of you seeking the bigger wins.

The game won’t be everyone’s cup of tea, and it’s high volatility meaning the wins have the potential to be bigger but are less frequent, so if you like more regular, smaller wins, then this probably isn’t the game for you.

You will notice immediately that the reel set up is a little different in this game. First off, it has six reels rather than the most common five reel layout. The reels also differ in size with the two leftmost reels having three rows, the middle two displaying four rows and finally the last two reels with five rows each.

You will also spot the ‘Nudge’ feature at the base of the reels along with the ‘Wild’ and ‘Sync’ features. This allows you to nudge up to three reels including the bonus symbols and free spins. The random features are a nice way to add a bit of excitement, but it’s the free spins feature where the big wins are possible as any combination of the three GRANDomizer features can be activated during the free spins. You’ve just got to get there first! We hope you are feeling lucky as you are going to need it!

This game is perfect for everyone, as both seasoned and new players will love the three exciting features and the new reel structure – your players are in for a real treat!

We aren’t in love with this game, and it’s certainly not one of our favourites from Quickspin especially as they are up against some tough competition from some of their recent releases, but it has a few good features that if you can trigger during free spins can create some epic wins! 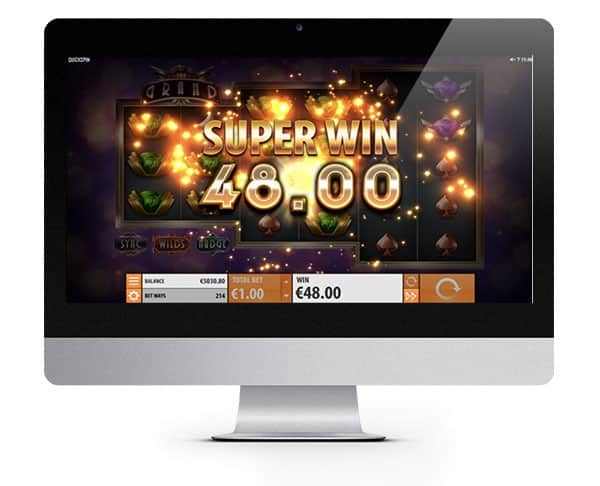 The Grand is an unusual slot, and while it’s not packed with dozens of features the randomly activated nudge, wild and sync features can help create some decent wins. The epic wins might be few and far between, but the game is worth a few spins if you are feeling lucky! Not our favourite, but still the game has its charms.