In this sequel game, The Taco Brothers are yet again on a mission to save their village from the evil Captain Diaz. With Walking Wilds, Respins and Multipliers and a whopping 10,000x possible win potential, this game will surely appeal to fans of the original and win over some new players too! 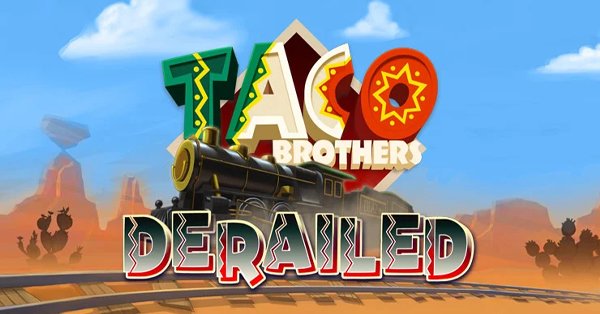 You can spin from 20p to £100 per spin, and the game is available on all devices including mobiles and tablets. Taco Brothers Derailed has an RTP of 95% so it’s slightly lower than average for an online slot game. The game is classed as medium to high volatility and has a maximum win potential of 10,000x your stake. Certainly a huge increase on the other original Taco Brothers slot game!

Taco Brothers Derailed is a slot game with a gold rush theme, based in the village of Santa Maria Mexico. The game features six reels and has 466 paylines.

The game graphics have a wild west feel to them with symbols featuring a mixture of maracas, ram skulls, whistles, lanterns and a gold safe. The three highest value symbols feature the three Taco Brothers, Paso, Pico and Pepe. There are also some other symbols of note to watch out for during gameplay. These include the Wild symbol that can substitute for all symbols except for the bonus symbol. Additionally, The Walking Wild, Walking Multiplier Wild, Captain Diaz and Señorita symbols. But more on those shortly. 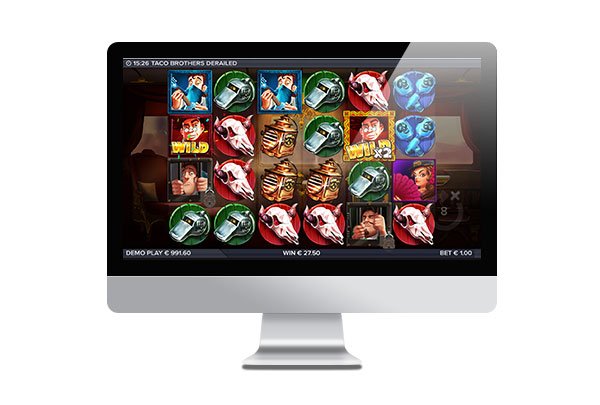 Open up the game and you will be taken back to 1800s Mexico. You’ll be given a brief backstory to introduce the game and its main charters. If you wish, you can cut to the chase and skip this part, but it’s a great insight into the game and its features. The 6 x 4 reels appear filled with the familiar faces of the Taco Brothers and some other symbols of lower value.

You can start off by spinning the reels with a default bet of €1. Alternatively, you can adjust the bet value to suit your budget. The game can be played from 20c up to £100 per spin. Click on the coins symbol to adjust it to your preferred level. If you wish, you can also set the game to auto-spin for a predetermined number of spins. This is great when you don’t want to keep continuously hitting the spin button. Just relax and watch the action unfold!

As you spin, the symbols will fall away and be replaced by a new set of symbols. The aim of the game is to land 3, 4, 5 or 6 matching symbols on successive reels starting with the leftmost reel.  The game has several settings which can also be adjusted, including choosing to have the game sound on or off, you can just turn the music off if you wish. The game also features a Quick Play mode which speeds up the spins a bit.

Wild symbols can appear during the base game. They can substitute for all paying symbols except for the Walking Wild, Walking Multiplier Wild, Captain Diaz and Señorita symbols.

Any Taco Brothers symbols landing on the reels can also appear as Walking Wilds. These in turn can generate re-spins. The symbols will move to the left and will turn any corresponding Taco Brother symbols into Wild Symbols.

When Captain Diaz appears, he will take out his keys and imprison one of the Walking Wild Taco Brother symbols.

Señorita will unlock a Taco Brother Walking Wild symbol or pull it back to reel six where it will have the maximum number of leftward moves available.

Landing 4 Bonus symbols will trigger the Super Bonus Game. During this enhanced bonus round, the Walking Wild Taco Brothers and the Walking Multiplier Wilds will move at once from right to left until they spin off the reels on reel one.

All ELK Studios games now also come with an X-iter feature. There are five different game modes that can be accessed which work as bonus buys and cost between 2x and 500x your total bet. Using the X-iter feature will allow you to access certain features in the game at a cost.

The game has a theoretical payout percentage of 95% so sits slightly lower than average.

The game doesn’t feature free spins but the respins features mean that further spins can be gained when landing the Señorita symbol or during the game’s bonus features.