Never mind going pear-shaped, things have gone all cube-shaped in this fruity themed sequel from NetEnt! Strolling Staxx: Cubic Fruits is ripe for the picking, have you tried it yet?

New on the NetEnt block comes Strolling Staxx: Cubic Fruits. The next instalment in their popular Staxx series which also includes Butterfly Staxx and Neon Staxx. We love them all, but this one has to be our favourite so far as it has gorgeous graphics and the cube-shaped fruits take the game in a bit of a different direction from the typical fruity-themed slots we’ve played before. 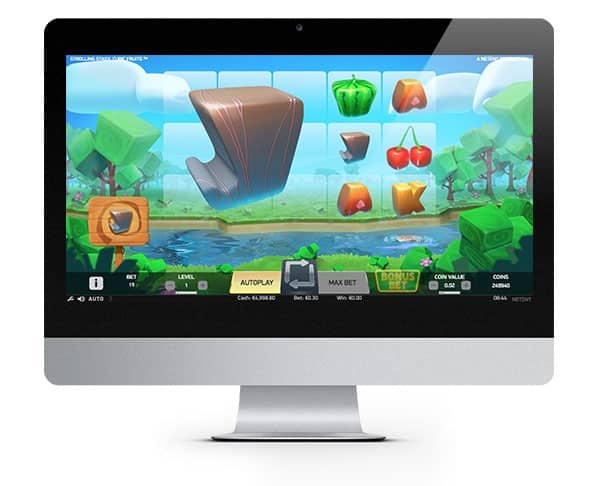 This colourful blast of fruity fun is just the ticket if you love simple slots without too many features to wrap your head around. Plus if you’ve played any of the other Staxx games in the series, you’ll be well-versed on what to expect.

For those of you new to the Staxx franchise you can expect Colossal Symbols that can cover up to 9 reel spaces and stacked symbols that create additional chances to win thanks to the Strolling Staxx Re-Spin feature! Some players may miss the presence of a free spins round, but this game moves quickly, and there are some good opportunities to take home some wins.

The 5×3 game is set amongst a cuboid world full of angular trees and flowers which bring the whole game to life. Each symbol is a series of cube-shaped fruits and letters and numbers. The ‘W’ Wild symbol and watermelon are the highest paying symbols followed by the other fruits, and the letters and numbers make up the lower value symbols.

As you spin the reels, they will rotate, and fruits and symbols will fall into place. Watch out for those Colossal Symbols which can take up to 9 spaces on the reels; they will split into between 2 and 9 symbols depending on their size so can help create more chances of a winning combination or a stack that will trigger the re-spin feature. 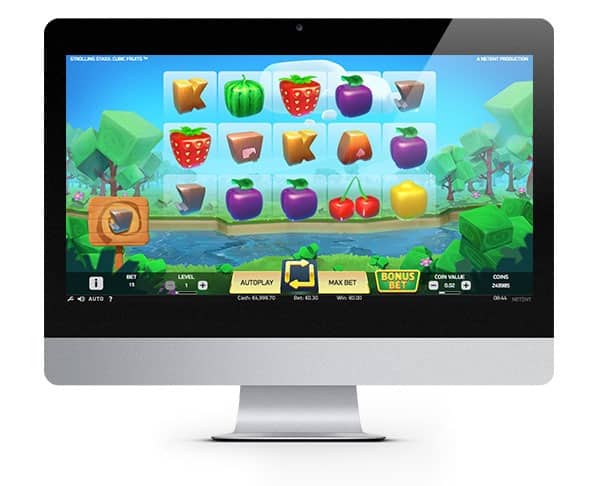 NetEnt has been really upping their game quite literally with a considerable commitment to churn out up to 35 new games this year alone! Some might be a little sceptical and wonder if that may have an impact on the quality and innovation we see from their slots but if Strolling Staxx is anything to go by they are still well and truly on their game!