All of your favourite butt-kicking characters are back in NetEnt’s Street Fighter II: The World Warrior!

This trip down memory lane is exactly what we need right now! Find out what we thought of the new retro release from casino software giants NetEnt! 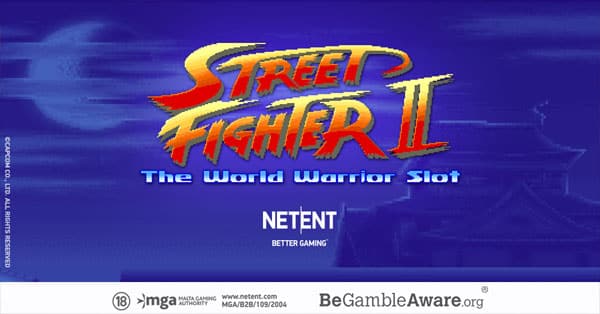 The arcade was where it was happening back in the day so what better way to lift our spirits and take a trip down memory lane than with the release of NetEnt’s Street Fighter II: The World Warrior! They have brought back an absolute arcade staple and we are thrilled to see they’ve kept the look and feel pretty much intact. It would have been a shame if they had tried to update the graphics or do something snazzy with it, it’s all about those iconic pixelated characters and awesome sound effects!

Play Street Fighter II and other NetEnt slots at these casinos!

We only feature the very best online casinos. If you want to play Street Fighter II: The World Warrior and other NetEnt titles at a reputable and trusted casino brand, check out some of these casino listings:

Get 150 Free Spins on Street Fighter 2 or another Netent game of your choosing when you deposit at Gate 777 Casino.

As soon as you load up this game, you’ll be taken right back to that arcade! All the characters are there, Guile, Bison, Ryu and Blanka. You are invited to choose your character at the start of the game. They vary between characters who win often and characters who can win big. Each has its own special Wild feature such as stacks of wilds, randomly placed wilds etc. 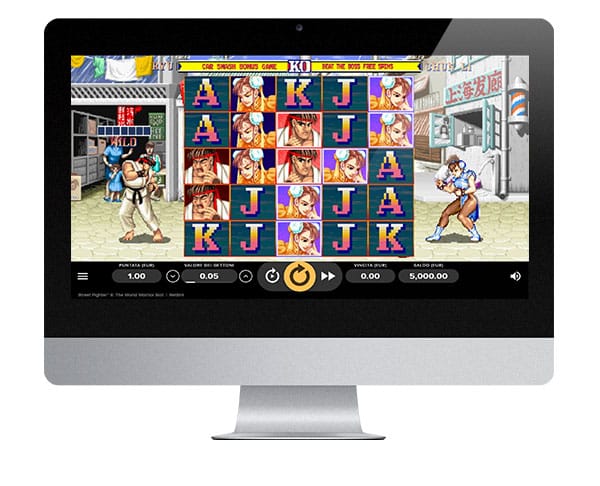 Each fighter will be placed either side of the five-reel, five-row grid ready to take on the reels and hopefully score some wins for you! The reels feature various images of the two fighters taking part in the match with the blocks tumbling in from above. The health bar above the reels lets you know how you are getting on and which character is winning the fight and subsequently which bonus games or free spins round will be triggered at the end of the fight.

It’s always a gamble taking on such an iconic game and creating it in slot form but NetEnt has kicked butt (excuse the pun) with Street Fighter II! They have brought the original game to life and you really feel as though you are playing the actual Street Fighter Game which the original characters and a fantastic reel set up which pits two of the characters against each other.

You’ll choose which character you want to play with right at the start, you’ll then be placed against a random opponent. Choose wisely as each fighter will have it’s own special set of skills when it comes to random wilds and stacked wilds. As you spin, the fight is on! Watch your chosen fighter kick some serious reel-butt and hopefully score you some serious cash! 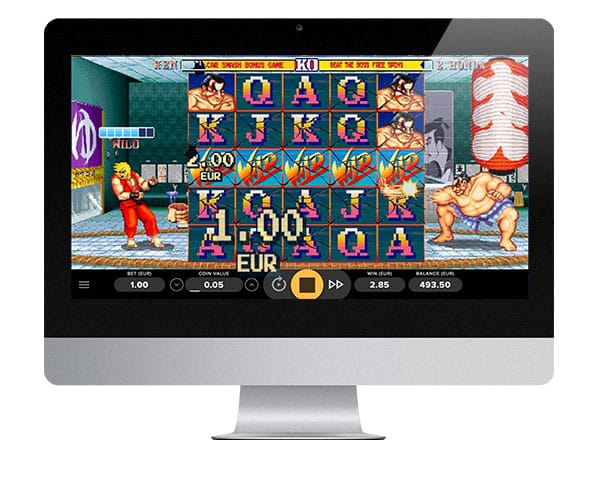 The battle is over when one fighter runs out of health points. If you win the fight, you’ll be awarded Beat the Boss Free Spins and if you lose the Car Smash Bonus Game is activated. Dealing a blow to your opponent is triggered by winning combinations, so the better you are doing the more damage you are causing your opponent and their health bar.

During the main game and as part of the Beat the Boss Free Spins you’ll have a Wild Gauge which resets before each spin. This fills up by one point for each high-value symbol that forms part of the winning combination. If there are seven or more points on the gauge are there are no winning combinations, the character uses his or her unique Wild feature which will place wilds at random on the reels.

If you have won the fight during the main game, you will trigger the Beat the Boss Free Spins. There are four levels, each with its own opponent for you to face off against. The level multiplier will also increase as you progress. The free spins continue until you lose or defeat the final opponent Bison. Anyone who manages to get through the final round undefeated will be given an additional award of 100x the bet.

If you’ve lost during the main game, then the Car Smash Bonus Game will be triggered. In this feature, you can actually take control of your character using hotkeys to destroy the car. Destroying the car will award a random win of between 5x and 15x your bet.


Yes, the Beat the Boss Free Spins feature which continues until you are defeated or beat the final opponent Bison.

We have stopped up all of the best bonuses so you can enjoy playing Street Fighter II: The World Warrior even more!

For die-hard Street Fighter fans, this game was either going to be a huge hit or a massive flop for NetEnt. Thankfully, they have created a great game which honours the legacy of the game rather than trying to do a reboot with updated graphics and effects. It’s awesomeness in its finest form! Any fan of retro arcade games will absolutely love this game!