This space-themed slot from BTG might look a little alien, but their Megaways™ feature is one fans will be more than familiar with!

StarQuest is a fun futuristic slot game with a heroine that looks remarkably like many of BTG’s other leading ladies (think Queen of Riches!). Anyhow, this high variance slot will take you on an intergalactic journey featuring wilds, multipliers, re-spins and of course the brilliant Megaways™ that maximises those ways to win!

The slot landed (or should we say blasted off) in October 2016, so it has had plenty of time to build up a solid following among the online gambling community. Reviews are pretty good for this game, and it seems to have stood up well to some of BTG’s more recent releases. The fact that it incorporates their Megaways™ engine was always going to stand it in good stead.

The game can be played on desktops and laptops and of course as with all other Big Time Gaming slots it is also fully optimised for mobiles so you can play on the go too. Since the middle of last year, this game has seen a huge surge in the number of casinos it is featured at. This is a reflection of how popular BTG slots are becoming with fans going out of their way to find a place to play their favourites.

If you love a sci-fi or space themed slot, StarQuest has all the components you could be looking for as well as a sexy looking spacewoman! Set in deep space, the backdrop is a galaxy full of stars, comets and planets. It really allows the game to pop especially with the colourful gems, numbers and letters that make up the game’s symbols. 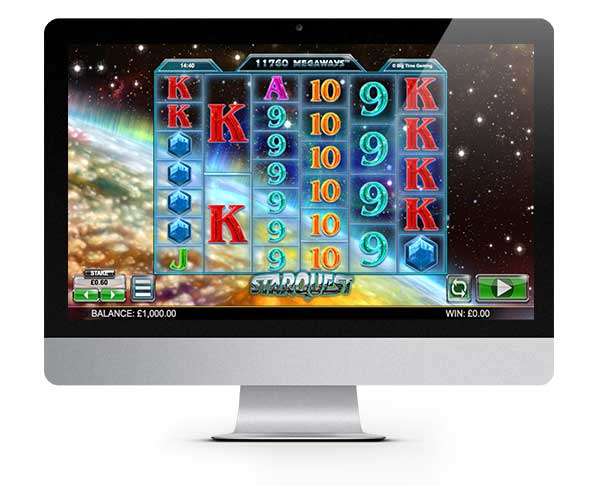 The game follows a simple 6-reel structure, but as symbols can cover a number of rows combined with the Megaways™ feature, there are almost infinite possibilities in this game. What not see where StarQuest takes you?

The wilds are the ones to watch in this game especially if they appear during a free respin where they can be very valuable indeed!

StarQuest: Is it BTG’s bright star or a total blackout?

There’s no doubt that StarQuest is a fun and exciting slot to play if you like high variance slot games. The Megaways™ feature adds an extra level of excitement as you could literally find anything could happen from a whole lotta nothing to everything at once when those wilds and multipliers hit just right!