Quickspin is expanding its games portfolio yet again using their ‘portrait first’ focus. With their sights firmly set on the mobile gaming market, they have launched Skulls UP! A tropical island based slot game featuring Skulls UP! Re-Spins and Flaming Free Spins! 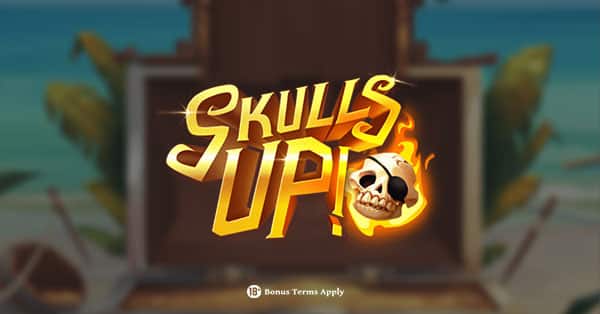 Quickspin has been instrumental in the mobile gaming market and their commitment to creating mobile games has been at the forefront of its strategy for several years now. Their ‘Portrait first’ focus has enabled them to tap into the social gaming market in a big way with games that work seamlessly without the need to flip your mobile device around to enjoy the games. 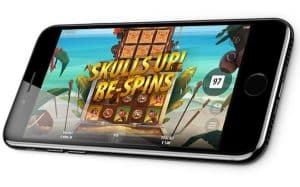 Skulls UP! is the latest releases to follow this same principle. Set around a treasure island theme, the game is full of fun with some cool features including Skulls UP! Re-Spins and Flaming Free Spins!

Play Skulls UP! and other Quickspin slots at these casinos:

We have all the best places to play your favourite Quiskpin video slots!

The game really turns up the heat with a tropical island theme complete with crystal clear waters, white sandy beaches, palm trees, and erm, flaming skulls! So it’s a pirate island, not so relaxing for an exotic break away then! What is exciting is the features Quickspin has lined up in this game to really ramp up the action…Flaming Skull Wilds, Flaming Free Spins and Skulls UP! Re-Spins, but we’ll get into those in more detail in the next section.

The 5×3 reel set up is displayed within the open lid of a treasure chest and the symbols themselves are made up of a motley crew of pirates with names like Biggie, Smelly and Wrench, plus there’s their parrot called Biscuit and other pirate based paraphernalia! You’ll also notice there is a space above the middle three reels. During the Skulls UP! Re-Spins feature, the middle reels can grow up to six symbols in height. This feature can increase the number of bet ways from 243 up to 1944! Although to get to that level is pretty rare! 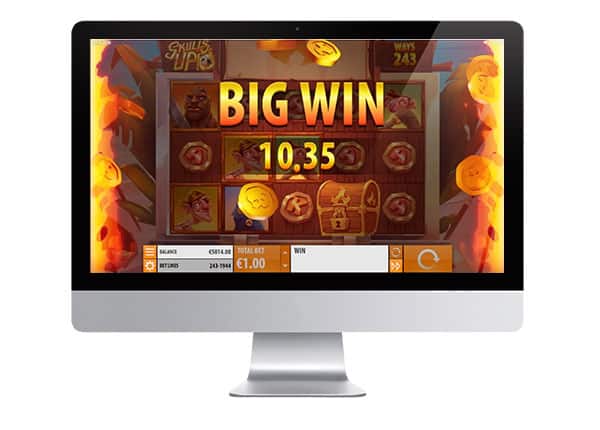 We actually really like the simplicity of this game. That’s not to say it’s short on features because it isn’t. There is plenty going on and the expanding reels can create some chances for some pretty decent wins. Quickspin has done an excellent job of creating a simple but exciting game format with brilliantly themed features. Here are the main ones… 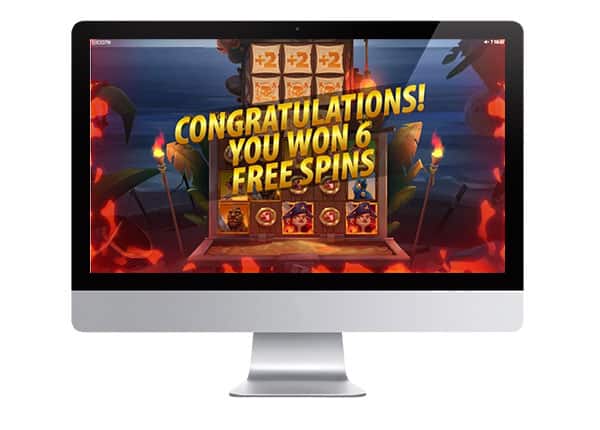 Be on the lookout for Chest Scatters as three of these will trigger the Flaming Free Spins. Six free spins will be awarded at the start of the feature and if you happen to have had any reel positions unlocked from any re-spins these will remain open for the duration of the free spins feature.

As in the main game, you can also trigger the Skulls UP! Re-Spin feature during free spins and for any reel you get to the maximum height you’ll get another 2 free spins!

We wanted to create a game that had a reasonably achievable potential to win big, without losing the fun of the casual playing experience. If you manage to trigger a lot of Respins early on, when you’re inside the Free Spins Bonus, you can have a lot of fun in this game. Opening up all the reels will not only give you more free spins – those extra spins will also open up the opportunity for some huge wins!

What is the RTP of Skulls UP?

The theoretical payout of this game is 96.26%

Does the game feature free spins?

How many ways to win are there?

The game starts at 243 ways to win but can increase up to 1944 if all middle reels are expanded to their full height.

Quickspin is one of the most exciting software developers in the industry at the moment. They have the foresight to know exactly what players are looking for and their structure and super effective team knows how to get their products to market quickly so you can enjoy them! Skulls UP! is a great example of this, the intuitive design can be played on any device but first and foremost it’s a mobile slot to be played in portrait mode so you lose absolutely nothing of the quality design or functionality of this game. It’s exactly as they intended it!