Blueprint Gaming has entered the weird and wonderful multiverse of Rick and Morty in their recent slot release which features the popular Megaways slot mechanic under license from Big Time Gaming! Read on to discover more.

Blueprint Gaming promises to take players out of this world with their new online slot game inspired by the Emmy Award-winning animated adult tv show Rick and Morty as seen on the Cartoon Network. As if that wasn’t enough to get us pretty excited about playing this game, the addition of Big Time Gaming’s Megaways feature might just tip us over the edge! 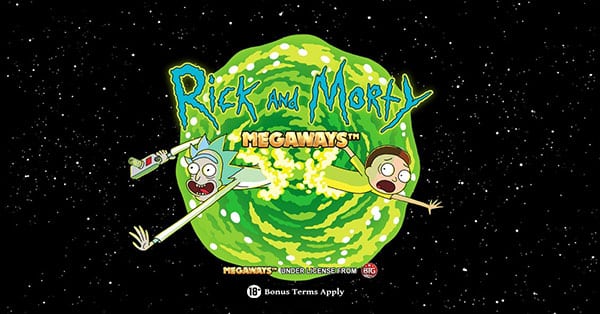 The game has been developed under license from Adult Swim and Warner Bros. as well as bringing in the Megaways mechanic care of BTG. A lot of work has gone into making this slot happen, so we need to give it the attention it deserves!

The game follows the adventures of crazy scientist Rick and his hapless grandson, Morty, as they head off on a quest to assemble the biggest wins our galaxy has ever encountered. Every win triggers cascading symbols creating more chances to win with up to 117,649 ways to win per spin! This also gives players more opportunities to gain access to one of the games’ main features which include triggering the free spins rounds which are aptly named Pickle Rick, Federation Wild Spins and Vindicators Free Spins! We’ll cover the game’s features in more depth if you want to hop to our ‘Gameplay’ section below.

The game is available to play on desktop and mobiles in an HTML format and is available in the UK and European markets currently.

Play Rick and Morty Megaways and other Blueprint slots at these casinos:

Don’t waste your valuable gaming time searching out a casino to play Rick and Morty Megaways. We have done all the hard work for you and found the best online casinos to enjoy this new game:

Rick and Morty has become a hugely successful adult animated science fiction based sitcom. With the misadventures of mad scientist Rick Sanchez and his grandson Morty Smith. It is always a risk designing a slot game based on a cult classic like Rick and Morty. Still, Blueprint Gaming has done it justice with a madcap slot game full of twists and turns and all the signature aspects taken directly from the show itself, so the result is a truly authentic homage to the smash hit show. 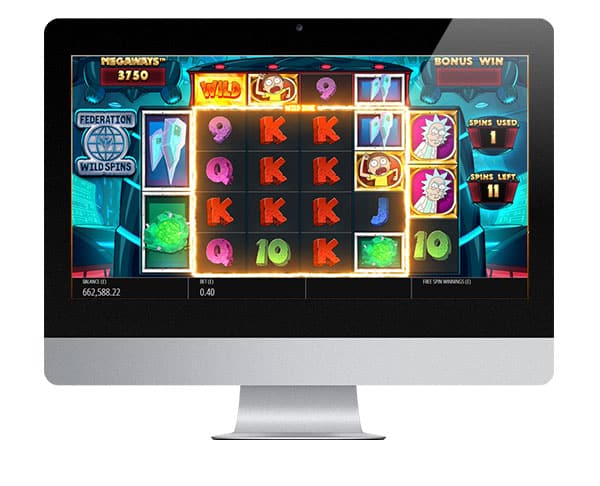 So does Rick and Morty Megaways feature as much entertainment value as one of their tv show episodes? Let’s find out as we delve right into the game’s features:

Any win during the base game and in free spins will trigger cascading symbols where the winning symbols are removed from the reels and replaced by new ones which drop in from above creating more chances of further wins. The feature continues until no more wins are created. 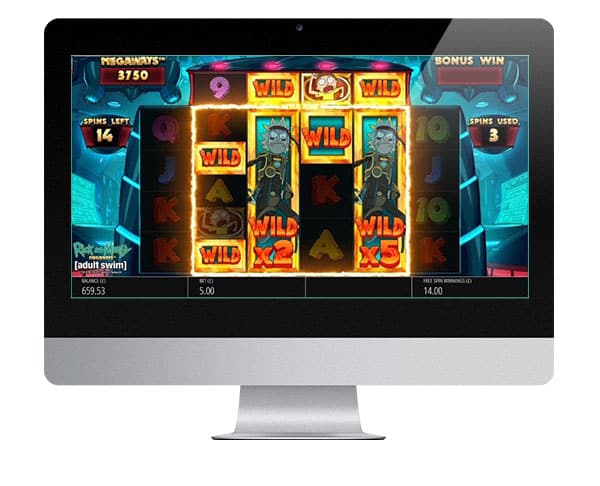 The game features various free spins mechanics which can be triggered by landing four or more of the Bonus symbols in the main game. You’ll then have the opportunity to pick which free spins round you’ll play. In each case, at least 12 free spins will be awarded.

In this feature, your wins will be boosted by an unlimited multiplier. The multiplier starts at 1x and increases by 1 with every winning cascade.

In this feature, four characters known as the Vindicators will appear to the left-hand side of the reels. During the feature, an additional gold badge symbol is added to the reels. Landing a ‘V’ symbol in the top reel window will activate the badges which will lock in position as the reels spin again. This will continue until no new badge symbols appear and your badge values will be added together for your award. In addition to the gold badges, the character badges can also appear and are worth 10, 20, 50 or 100x your stake.

“Wubba Lubba Dub-Dub! We’ve brought the hugely popular Rick and Morty™ to the reels for a trippy gaming experience packed full of cascades and bonus features.”

“We have a strong reputation for delivering engaging branded games that bring films and TV shows to life and our design and development team have once again delivered with an out of this world slot.”

What is the minimum/maximum bet size?
Rick and Morty Megaways can be played from 0.10 per spin up to 10.00.

Find out where to pick up the best bonus so you can enjoy playing Blueprint Gaming’s new slot Rick and Morty Megaways!

Rick and Morty Megaways joins Blueprint Gaming’s ever-expanding range of Megaways slots. This mechanic has proved hugely successful for them, and with the extra interest of having the tie in with such a huge TV show, we can assume this one will be one of their most successful games to date!