Get free spins to play Reactoonz 2 is the sequel to one of Play ‘N Go’s most popular online slots of all time.

The 7×7 grid game is bursting with features, so much so it’ll leave your head spinning as well as the reels!

We have picked out some of our best casinos for Play ‘N Go slots and more importantly, sites where you can play Reactoonz 2! 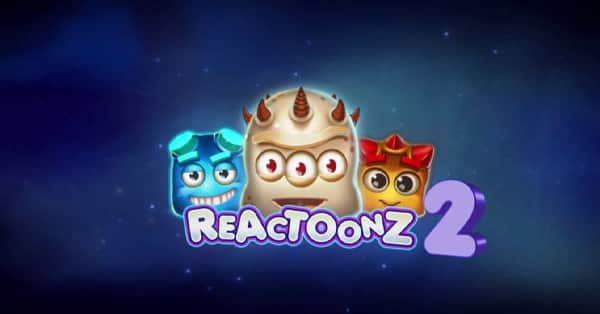 Reactoonz is back again and this time they have brought with them even more features and fun to create super exciting gameplay and chances to win! Play ‘N Go has some of the most popular online slots in the world, and with hundreds of casinos featuring their games, where do you even start?

The crazy Reactoonz gang has made a welcome return in the new Play ‘N Go slot release Reactoonz 2!

The 7×7 slot game features cascading symbols and cluster wins! The sequel to one of Play ‘N Go’s most popular games comes with some exciting new features giving casino fans some fast-paced slots action full of thrills and potential to win big!

The game will look familiar if you’ve played the original version of the game. With all of the characters and spacey theme still the basis of the game. There are several feature changes to note and an extra charge meter which we’ll get on to in the ‘Gameplay’ section below.

The 7×7 reel structure features the familiar extraterrestrial characters and colourful symbols. The Gargantoon wild symbol can appear and help to create even more winning combinations and clusters. Plus in this version of the game, there are also some additional wilds including the Energoon Wild and Electric Wild which we’ll also cover in detail in the next section of this review.

The 7×7 grid is full of colourful symbols as well as an extra collection meter which springs to life when players land a cluster win. As you spin the reels, the symbols will drop into place to create clusters of matching symbols which will disappear causing a new cascade of symbols to fall into place and hopefully create another winning cluster. This continues until no more winning clusters are made. 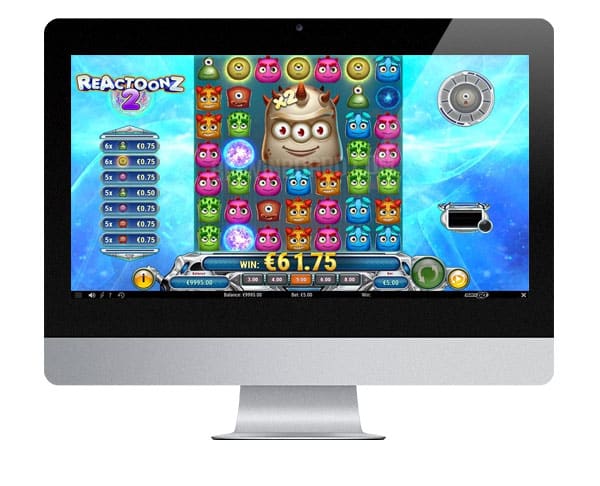 Here is a short rundown of the different game features you may encounter while playing Reactoonz 2:

This appears to the right-hand side of the reels. A one-eyed symbol is chosen at random to fluctuate on each spin. If they form a winning combination, then an Electric Wild appears on a spot where a symbol has been removed. The Fluctometer can hold up to 11 charges. When fully filled it will randomly create 1, 2 or 3 Electric Wilds.

This the second charge meter in the game which appears below the Fluctometer. Any non-wild symbols removed by an Electric Wild will charge up the Quantumeter. It will keep on charging during the round but will reset at each new round.

If the Quantumeter does not reach level 3 before it resets, it will release Energoon Wilds onto the reels. Level 2 releases a single 2×2 Energoon Wild and will cost you 30 charges. At level 1, four 1×1 Ebergoon Wilds will be released at a cost of 55 charges.

Phew… bear with us. It’s a lot to take in, but it all becomes a lot clearer as you play. Make use of the free play mode to get to grips with the game and its many features before you place any real money bets.

This feature is activated when all of the various features are complete and 2 or more Electric Wilds are remaining on the reels.

These can appear on the reels in any position. They can’t form a win but can be transformed into Electric Wilds when they appear adjacent to any winning symbols or when a Wild Pair Explosion is triggered.

What is the RTP of this game?

What bonus features are available?

This game is absolutely packed with various features including a variety of wilds, cascading symbols, cluster wins and more!

What is the minimum and maximum bet size?

Wow! This game is a real mind-melter! There is so much going on and plenty of crazy features and quirky aspects that keep gameplay super interesting and moving all the time! Players might want to spend a bit of time trying the game out for free before they play for real to get your head around all of the various features!