Step into the arena and see if you can come out as the gladiatorial champion in NetEnt’s Roman Empire inspired Rome: The Golden Age slot game! 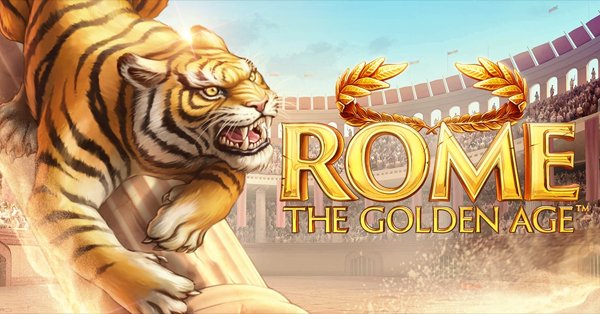 This new slot game from NetEnt takes us back to a time of epic battles and incredible bravery as the gladiators take to the arena to face off against their enemy. In the game, you can take advantage of a free spins bonus. Plus if Fortuna favours you, you might even land the Golden Age symbols!

The very best Gladiators know their enemy and know how to win so if you want to beat this game, read our slot review and get to know the intricacies of the game so you can face it head-on!

The game brings the sights and sound of the gladiator arena to life with dramatic music that forms the backdrop of the game. As you spin the reels the tension builds, exploding into action if you trigger one of the game’s many features or land a big win. 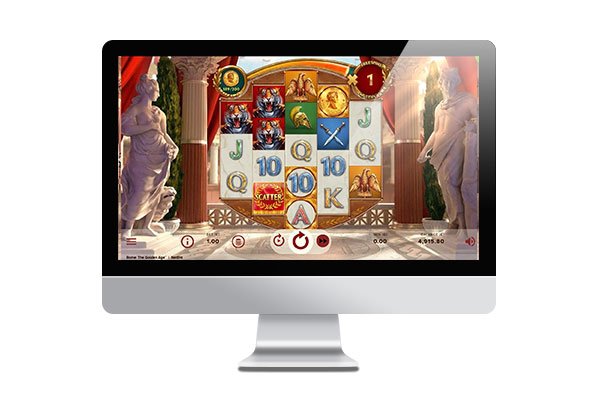 The reel set up is quite unusual with a circular shaped base, on top of which sits five reels. The middle reel consisting of five symbols, while reels 2 and 4 feature four symbols and the outer reels have just three.

The game has 20 fixed paylines, which will all be active whether you are playing with the minimum stake size of €0.10 or right up to the maximum of €50. Wins are paid left to right with only the highest win per bet line paid out.

During the game, frames can become active and in turn, can give you wilds as well as turning adjacent symbols wild giving you a bigger chance at a winning combination. As you collect Golden Age symbols you will be adding to

your total which will be calculated and used as a multiplier should you trigger the free spins feature. This has a maximum of up to x1000 available.

During free spins, every Rome symbol will give you a cash prize to whic

h your collected multiplier will be applied. Manage to fill all the positions and you can double that up to x2000. This can give you a possible 100,000x your stake within the free spins feature.

When this symbol appears on the reels, it will mark that position with a Frame. At random, the Golden Age symbol can turn into a Rome symbol. If this happens then the Frame turns into an Active Frame. 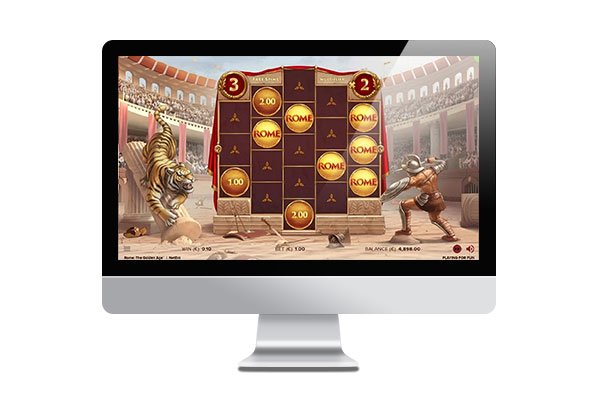 The positions that held the Rome symbol then turn into a Wild symbol on the next spin. Any adjacent positions with Frames will also turn into Wilds as will the positions next to them. An action that can take place up to five times creating a cluster of wilds and some good opportunities for a winning combination.

Any Frames and Active Frames will remain in place until they turn into Wild symbols or the Free Spins features starts.

The Wild symbols will substitute for all symbols except for the Golden Age, Rome and Scatter symbols. 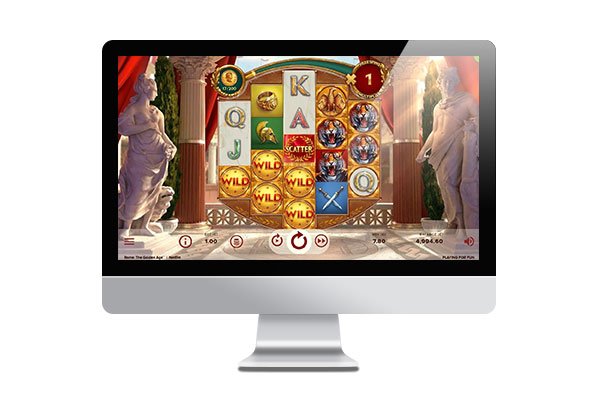 Every time a player lands a Golden Age symbol anywhere on the reels, one point will be added to the progress bar. You can check your points progress in the bar that sits above the reels.

This acts as a multiplier system that will come into play during the free spins feature. It has a possible x1000 multiplier.

If a Golden Age symbol lands on a Frame or Active Frame, a random number of points is awarded between 1 and 4 helping to ramp up your progress.

Each time the progress bar reaches 200 points it will upgrade and reset back to zero. With each upgrade, the multiplier will get progressively bigger from x1 up to x1000 in several stages.

Free spins are triggered by three Scatter symbols appearing on the reels during the main game. These can only appear on reels 2, 3 and 4. Initially, 3 free spins will be awarded. During the feature, any reel positions with Frames or Active Frames will be locked in place which will remain so for the duration of the round. These can also award cash prizes from x0.5 up to x50 your stake.

During the free spins feature, only Rome symbols can land on the reels. A Rome symbol landing on an unlocked position can award a random prize. This is also between x0.5 and x50 your stake and will also reset the free spins back to three spins. At the end of the feature, all wins will be calculated and the multiplier that was collected in the main game will be applied. Free spins end when the counter reaches zero and all reel positions have become locked. At this point, a x2 multiplier is applied to all Rome symbols.

Yes, the free spins feature can be triggered by landing three Scatter symbols in the main game. Three spins are awarded initially with the possibility of triggering additional free spins during the round.

This is a decent game from NetEnt. The simple game features allow for easy gameplay but without compromising on the action. Especially if you can get enough of the Rome symbol and grab yourself a big multiplier. The free spins multiplier is where it can get really interesting. However, it can take some commitment to wait it out long enough for the feature to kick in.

If you think you have what it takes to beat the arena in Rome: The Golden Age, we have handpicked some of the best online casinos to enjoy this new NetEnt slot game.

Join Gate 777 Casino for 150 Free Spins on Netent slots and a strong deposit match offer worth €1500.