Mirror mirror on the wall, what is the best slot of all? NetEnt’s third instalment in their Fairytale Legend’s trilogy is a strong contender but is it a reflection of their finest work? Read on to find out more about Mirror Mirror!

Loosely based on the story of Snow White and the Seven Dwarves, NetEnt’s Mirror Mirror is the final slot game to launch from their Fairytale Legend’s series. We have thoroughly enjoyed this trilogy as they have brought to life some of our all-time favourite stories and created some brilliant slot games in the process. A perfect combination in our view.

As with Red Riding Hood and Hansel and Gretel, the graphics are on point with fabulous scenery to set the backdrop for the 5×3 reel game. There is also heaps of marvellous features that can be triggered randomly throughout the game, so plenty of ways to scoop up some decent wins. Let’s just hope the Huntsman doesn’t get to us first and cut our game short!

Play this slot at the following casinos 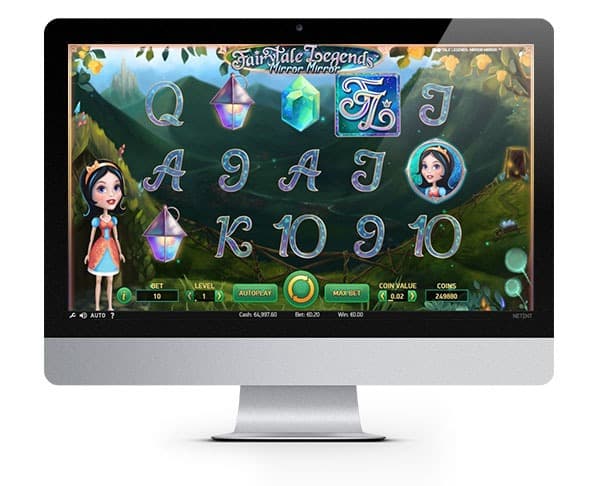 Much like the previous two releases in this franchise, Mirror Mirror has a beautifully illustrated design using the fairytale forest as the backdrop. The reels themselves rather than being solid, the symbols appear to float down the screen.

You will recognise many of the symbols such as the princess Snow White and the Evil Queen. Lanterns, precious stones, letters and numbers and the Fairytale Legends symbol make up the rest of the symbols.

The woodland sounds are soothing enough to lull you into a relaxed state ready to explore this marvellous game! Read on to find out more about the game’s features and bonus games.

Mirror Mirror is a 5 reel, 3-row slot game with 243 ways to win. There are no bet lines in this game. A winning combination is classed as three matching symbols in any position in three or more adjacent reels starting from the leftmost reel (or with the FL logo, two or more). Check the paytable if you are unsure as this is a different set up to say the likes of Hansel and Gretel.

Adjust your coin value and bet level in the usual way by toggling the +/- buttons below the reels. The game can be played from 10p up to £100 per spin. Setting it to ‘Max Bet’ plays the game at the full 243 bet ways at your current coin value. Make sure you check what your bet will be before you hit the spin button to avoid any nasty surprises! 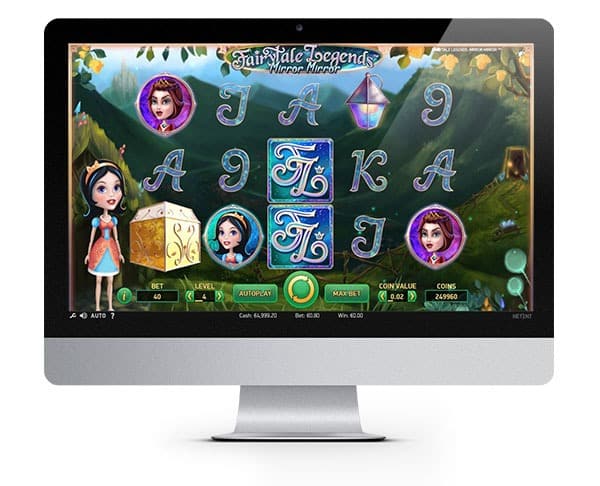 Well, there were seven dwarfs so it stands to reason that there should be seven bonus features to this game!