Using the tried and tested Who Wants to be a Millionaire Format, Big Time Gaming has come back even stronger with Millionaire Rush – and you don’t need to phone a friend to play!

Millionaire Rush slot game uses Megclusters and reactions giving you continuous wins and allowing you to notch up some serious cash!

You can play Big Time Gaming’s Millionaire Rush slot game at many online casinos. Choosing the best place to play has been made all the easier thanks to our list of recommended casino brands. Each of our featured casinos below has been tried and tested by our team so you can enjoy a safe and fun online gambling experience. Check out Millionaire Rush at these top casino brands: 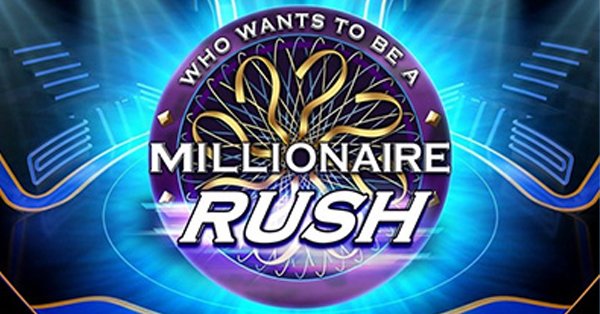 Millionaire Rush is one of Big Time Gaming’s latest slot releases and much like its predecessor is based on the TV game show Who Wants to Be a Millionaire. The game itself has a 5×5 real set up which can increase up to a maximum of 10×10 creating a maximum of 31,430x possible win.

The game has a 96.53% RTP and can be played from 20c up to €15 per spin. The main feature of the game is the Megaclusters mechanic which is one of Big Time Gaming’s signature features. Landing a cluster of five matching symbols will start a chain reaction creating even bigger clusters and bigger wins. With a possible 10×10 size grid, clusters can even reach 100 symbols!

The game design has the familiar stylings of the game show so fans of the show or the original Big Time Gaming slot game will feel right at home. Set within the game show studio, the reels start off as 5 rows by 5 reels with several elements to the left and right of the reels, or top and bottom if you are playing on your mobile device. 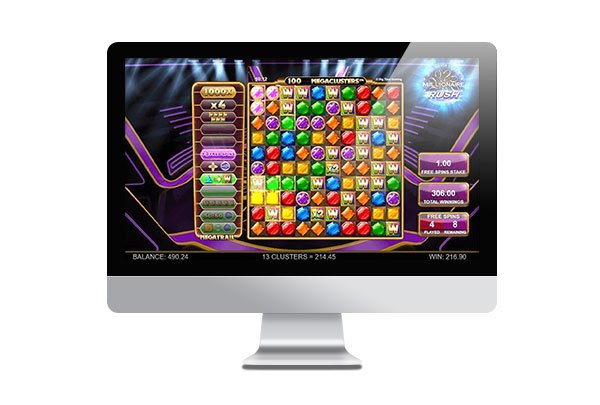 The Megatrail appears to the left of the reels and the symbols on the reels include simple gemstone shapes in primary colours. There is also a ‘W’ symbol which acts as the Wild and can substitute for all paying symbols.

Each time there is a win, the Megatrail feature will be activated. It features 12 levels or ‘rungs’. The first rungs will be empty and will be replaced randomly with every base game spin. Random bonuses are added on the Megatrail as you spin with 12 possible rewards to be won with winning spins.

Before you play, you can adjust the bet level from 20c up to €8 per spin with a default bet of €1. There is also the facility to set a loss limit and the number of spins you wish to play for.

The game has been developed using HTML5 technology ensuring it can be enjoyed across any device including mobiles and tablets.

Millionaire Rush comes with three main features including the Reactions feature, Megatrail and Free Spins. In this section of the slot review, we will dive into each feature in more detail so you know what to expect before you play.

The Reactions feature is triggered each time a player lands a winning cluster in the main game. Wins divide to make new symbols with four symbols within each space where there was previously one symbol. This increases the grid size and creates more chances of winning clusters with a maximum grid size of 10x 10 and 100 symbols.

Reactions continue for as long as there are winning clusters on the reels.

The Megatrail sits to the left of the reels and features twelve different levels or rungs. With each rung, there is an opportunity to unlock a different award to enhance your gameplay including adding wilds and multipliers, symbol duplication and symbol upgrades.

Each rung on the Megatrail features a random award, some spaces are blank including the first rungs which always start off as empty. With every base game spin, this changes, with at least 3 random awards added to the Megatrail with every spin. For every win, you will move up the Megatrail and claim 12 possible awards including:

Get to the 12th rung and there’s also a bonus prize available! This is triggered by winning twelve times in a row and is worth up to 1000x your stake!

Triggering rung seven on the Megatrail will trigger the Free Spins feature. 6 free spins are awarded at the start of the feature and the bonus prize doubles to 2000x your stake!

You can also trigger additional free spins by reaching rung seven on the Megatrail. Manage this and you’ll receive a further 3 free spins! There are also up to 6 random awards added to the Megatrail compared to a maximum of three in the base game.

The game has an RTP of 96.44% and is classed as very high volatility.

Yes, Millionaire Rush has a free spins feature than can be triggered by reaching level seven on the Megatrail. 6 free spins are awarded at the start of the feature with the opportunity for triggering a further three spins. There is a maximum potential for 99 free spins.

Millionaire Rush will appeal to fans of the game show and original game release but it also stands up in its own right. The Megatrail adds an extra element to the gameplay, keeps things moving and can produce some excellent chances to win big. This fast-paced game with reactions and cluster wins will be a hit amongst players who love a quick and exciting game!