Legion X is a brand new slot OUT NOW from NoLimit City. The popular Malta-based studio has been hitting the slot releases hard and fast this year, with this epic adventure set to be one of their most action-packed yet.

Read our full and in-depth online slot review to find out everything you need to know before you play Legion X slot game!

Legion X is a hotly anticipated slot release from huge software provider NoLimit City. This innovative and edgy software brand has created some of the most prominent slot games this year with some epic themes, features and down-right memorable games! Find all of your favourite NoLimit City games and play their latest release Legion X at these top online casinos: 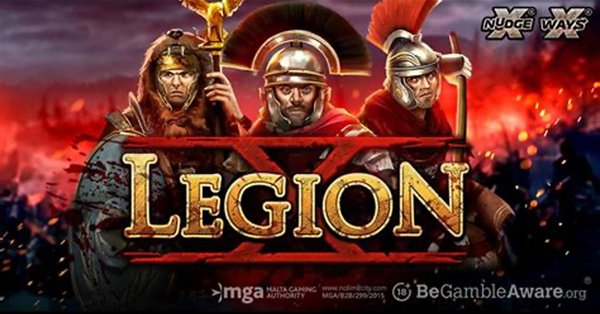 This latest NoLimit City game will take us back to 61 BC where we find Caesar assembling his most deadly army yet, Legion X. Charge into battle against this action-packed game which is brimming with features including xNudge, xWays and Infectious xWays as well as four different free spins bonus rounds!

Open up the game on your desktop or mobile browser and the brief intro will take you through the various features in the game. There are quite a lot so you have to scroll through to see them all, but fear not as we have a full lowdown on all of the game’s features in our next section including xNudge, xWays, Infectious xWays and the four free spins rounds.

As you begin the game, the sounds of bloodthirsty battle and an epic soundtrack await. The game board looks pretty imposing and dramatic with a series of symbols featuring various legionnaire warriors and gruesome opponents ready to head into battle! NoLimit City never holds back when it comes to some pretty detailed and graphic images, and that is evident throughout this game.

Before you begin, familiarise yourself with the game’s features and functions. The game has five reels with a unique set-up of 2 x 3 x 2 x 3 x 2. It’s not your typical setup but things can move quickly with this game with expanding symbols, so there are a lot of different ways to win, 72 ways in fact! 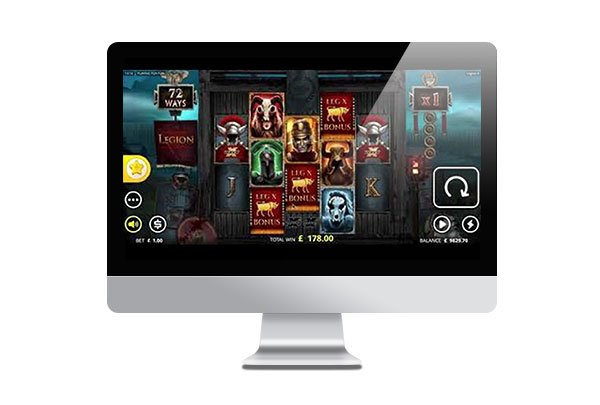 At the bottom left of the screen, you can set your bet level starting from 0.20 up to €100 per spin. You can also choose to turn off the sound if you wish and speed up the spins. The game has a bonus buy option that will shortcut you straight to the various free spins rounds, although it doesn’t come cheap depending on your bet level. At the lowest bet level, it’ll cost €14 to buy 8 free spins in the Legion Spins game right up to €240 to buy 10 free spins in the Gemina Free Spins round. Yikes!

Legion X has heaps of fantastic features, it can make your head spin to be honest! Let us take you through each of the game’s nine features so you are fully armed to go into battle with this game!

There are three different wild symbols in the game, each one is represented by the three different members of the Roman Legion. The Wilds will automatically nudge to become fully visible, filling the entire reel that they appear on. They will also increase the multiplier x1 for each nudge. This is known as xNudge, which we’ve seen in several of NoLimit City’s games before.

xWays is another of NoLimit City’s signature features that we’ve seen in many of their games. In Legion X, the xWays can only land on reels one and five. xWays symbols can transform into any other symbols except for the Bonus or Wild symbols. Between 2 and 4 matching symbols will be revealed, increasing the number of ways to win. Landing two xWays symbols will trigger the Infectious xWays feature. Any symbols of the same type appearing in the middle reels will expand to the same size, further increasing the ways to win.

Landing an xWays and Infectious Wild on reel one or reel five will transform all low-value symbols into wilds on the middle three reels.

NoLimit City’s Legion X has an incredible four different free spins features, each with its own variables and potential multipliers.

Legion X spins are triggered by landing three bonus symbols in the middle reels. 8 free spins will be awarded at the start of the feature. The first and last row will increase in size with an extra row added to each. The win multiplier will be increased by xNudge Wilds. This will remain for the duration of the feature.

Landing two of the special symbols, either xWays or Infectious Wild will upgrade you to an enhanced bonus mode. Landing one special symbol will add one extra free spin.

Landing three bonus symbols in the middle reels and two xWays symbols will trigger the Legion X Equestris feature. 10 free spins are awarded at the start of the feature.

At the start of the feature, the first and last reel will increase in size to four rows high. Any xNudge Wild symbols will increase the win multiplier x1. This will remain for the entire feature. xWays symbols are sticky and remain in place to trigger Infectious xWays for each spin.

Landing three bonus symbols in the middle reels and two Infectious Wild symbols will trigger the Legion X Fretensis Free Spins. 10 free spins will be awarded at the start of the feature.

The first and last reels will increase in size to contain 4 rows each. The win multiplier will be increased by x1 by xNudge Wilds. This will remain for the entire feature. The Infectious Wild symbol remains sticky and will convert all low-value symbols into wilds on each spin.

Landing three bonus symbols in the middle reels and one Infectious Wild and one xWays symbol will trigger the Legion X Gemina Free Spins feature. 10 free spins will be awarded at the start of the feature.

The first and last reel will expand to contain four rows. The win multiplier is increased by xNudge Wilds and will remain for the feature. The Infectious Wild and xWays symbols will be sticky and remain in position for the entire feature. They will convert all low-value symbols into Wilds and Infectious xWays will be triggered on each spin.

Legion X has an RTP of 96.04% which is about on average for an online slot game. The game is high volatility.

With nine separate features in this game, there is more action than most online slot games! Legion X is another superb game from NoLimit City. There really is no stopping this juggernaut software provider!