Play ’N Go has taken its turn in tackling the world of rock ’n roll with their online slot game based on the iconic rock back KISS! KISS Reels of Rock has an incredible 5 free spins features and plenty of explosive action. Read on to find out more!

Play KISS Reels of Rock at the following casinos:

Are you ready to rock? Tour the world with iconic rock band KISS in Play ’N Go’s latest online slot release KISS Reels of Rock! With five free spins features and random in-game enhancements including synchronised reels and random wilds, this game has plenty of action!

You can play Kiss Reels of Rock as the following online casinos: 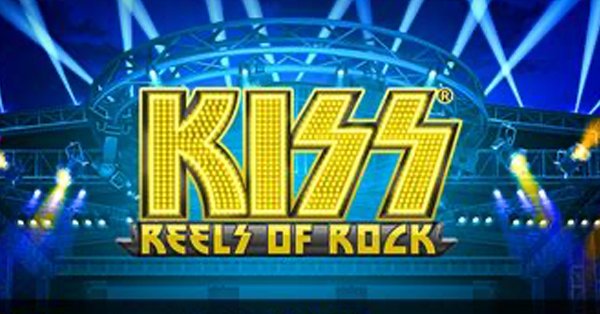 KISS is one of the most iconic rock bands in the world. Making a name for themselves for their unique stage make-up and shocking live performances that include shooting rockets out into the crowd and wild pyrotechnics. It goes without saying that Play ’N Go’s KISS Reels of Rock slot game isn’t going to be short on action!

Read our online slot review to find out what to expect from the game, its features and where to play.

As you start the game, you are met with KISS on stage, mid-show with a stadium full of screaming fans ready to rock! Each of the game’s main features is also displayed including the five world tour free spins destinations, extended grid, encore free spins and reel sync with multiplier wilds. Click continue to open up the main game board and start playing. The opening visuals are very impressive with the band introduced onto the stage and the unique grid appearing on your desktop or mobile screen. No surprise, the slot game features an epic Kiss soundtrack!

Before you begin, familiarise yourself with the various controls and features. You can even play the game in demo mode to try it out first before you place a real money bet. Along the base of the reels is the option to adjust the bet level. The game can be played from 0.10 up to €100 per spin with a default bet of €1.50. Toggle the -/+ symbols to adjust this to suit your budget. There is an option to set the game to autoplay for a specified amount of spins if you want to avoid continuously hitting the spin button. You can add in some additional settings here to include when the autoplay should stop in the case of your balance dropping to a certain level. 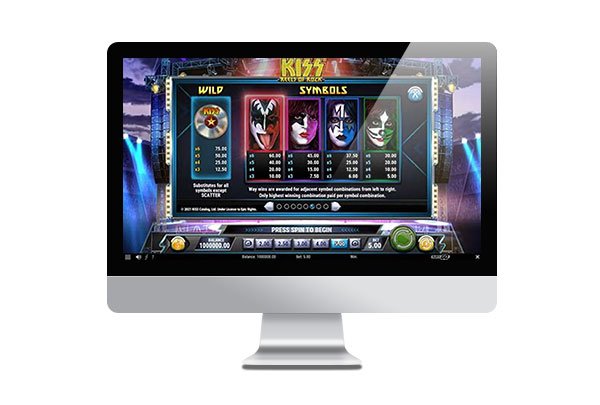 The reels are initially set to a 2, 3, 4, 4, 3, 2 symbol space set up, but when triggered during free spins, there is the extended reels feature which can adjust the reels to 6×4 for a set amount of free spins.

As you play, you’ll get to travel the world with the legendary rock band taking in countries and cities including Detroit, Johannesburg, Sydney, London, Rio de Janeiro and Tokyo. The reels display the painted faces of the band plus letters and numbers that make up the lower value symbols. There are also other symbols to look out for including the record wild symbol and the aeroplane scatter symbol.

KISSReels of Rock has been developed using HTML5 technology meaning it can be enjoyed on any device and has a responsive design that works on a mobile or desktop.

As you start spinning the reels, the symbols will move down on each reel to be replaced by new symbols appearing from above. The faces symbols cover two symbol spaces on the reels and may appear in full or partially obscured depending on where they land.

KISS Reels of Rock is packed with more random features than a stadium full of Kiss fans! Check out some of the game’s main features below:

This feature can be triggered at random at any point during the main game. It is also active throughout the free spins feature. Two reels will lock and synchronise. The matching reels can be either reels 1 and 6, 2 and 5 or 3 and 4 whichever pair of reels are synchronised will both display the same symbols. 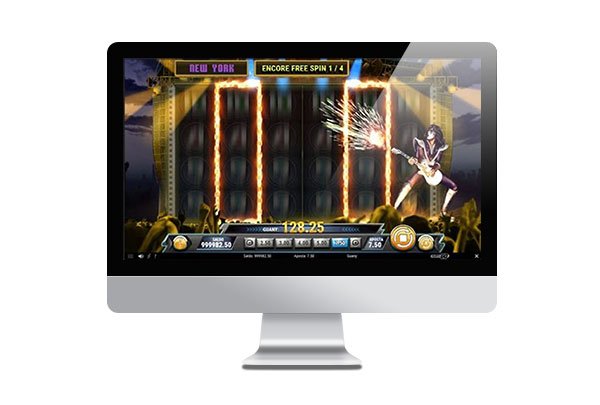 Drive Me Wild is another randomly activated feature that can occur at any time during the main game. The feature is not active during free spins though. The feature adds a random wild to the reels with a 2x multiplier attached.

Landing three scatters in the main game will trigger the World Tour Free Spins feature. Players are offered the chance to choose from the five world tour destinations including Johannesburg, Sydney, London, Rio de Janeiro and Tokyo. Each destination will have a different number of free spins available as well as Encore Free Spins which extends the reels to a 6×4 sized grid. 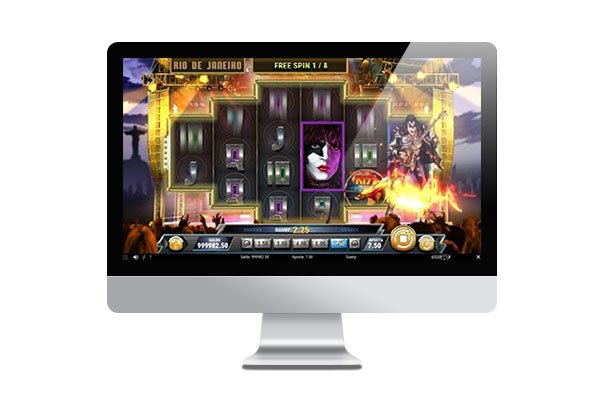 With each free spin, 2 reels will be synchronised with the Lock and Load feature active throughout the free spins feature. During the Encore Free Spins, the grid expands to form a 6×4 reel structure giving the player 4096 ways to win. All wilds during free spins come with a 2x multiplier. The feature is pretty hard to trigger though so patience and a sizeable cash outlay may be required!

KISS Reels of Rock has an RTP of 96.2% so it’s just slightly above average. The game is very high variance so any big wins won’t come around very often, if at all during your session.

The game has five different free spins features that can be triggered by landing three aeroplane scatters in the main game. At the start of the feature, players will have the opportunity to choose from five free spins destinations, each with a set number of Free Spins and Encore Free Spins.

The game can be played from 0.10 up to €100 per spin, The game will default to a €1.50 bet so make sure you adjust it to suit your preferred level before you start playing.

Rock band based online slots have been seeing huge popularity in recent years with titles including Guns ’N Roses and Motorhead from NetEnt and Play ’N Go’s ZZ Top Roadside Riches. It was only a matter of time before one developer tackled the most iconic rock band of all time, KISS! The band members alone make for a visually incredible slot game, with their instantly recognisable face paint, bandmates appear on the reels ready to rock!

This game has a lot of different elements including five free spins rounds with expanded reels during Encore Free spins, but it’s not easy to trigger the feature so don’t expect to see big wins that easily in this game. It looks at sounds awesome though and fans of the band will absolutely love the game!