John Hunter and the Tomb of the Scarab Queen from Pragmatic Play is a 5 Reel, 25 Payline slot game and is the 3rd video slot in the John Hunter series from this premium software provider.

John Hunter and the Tomb of the Scarab Queen Slot Review 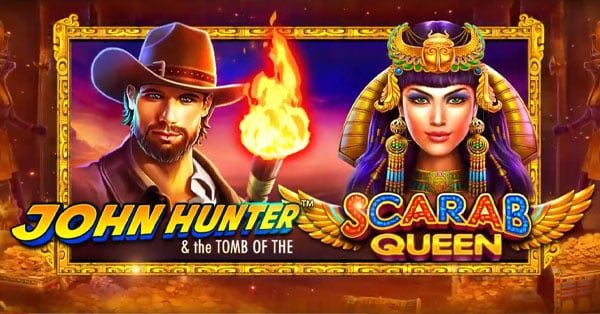 John Hunter, the intrepid adventurer resembling Indiana Jones in no small part has returned in the latest Pragmatic Play video slot which sees him taking on a dangerous mission to uncover untold riches. In this online 5 reel slot game with 25 Paylines John is off to Ancient Egypt to bag some of the loot from the tombs of the Pharaohs. Though, far from an original concept and closely resembling Rich Wilde and the Book of Dead series of games, Tomb of the Scarab Queen is quite enjoyable to play and has enough win potential to maintain a fun buzz.

Play John Hunter and the Tomb of the Scarab Queen and other Pragmatic Play at the following Casinos: 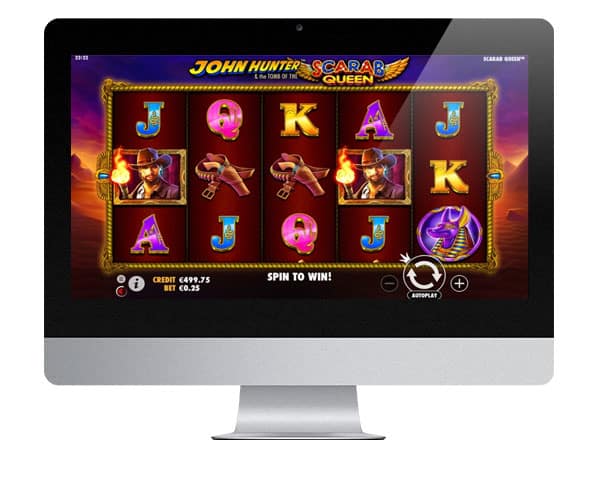 The game has a hypnotic Egyptian soundtrack that sets the mood. The game design is of course set around the Ancient Pyramids and is full of treasure and ancient artefacts. The basic symbols are Jack through to Aces and the other, more valuable symbols used include John’s Pistol, John’s Satchel as well as Anubis and a mug-shot of John Hunter himself which is the highest value symbol. The beautiful Cleopatra serves as the Wild Symbol and is likely to show up on any reel except the first. The Scatter is the Pyramid symbol and when you land 3 or more anywhere on the reels you’ll trigger the Free Spins Feature. 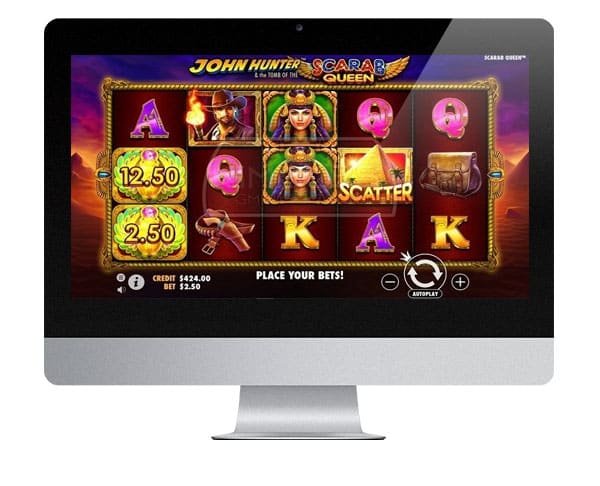 Free Spins. You’ll have gained 8 free spins for landing those scatters and during those spins any money symbols rolled will be gathered. The total of what you gathered after your spins make their way back to the board from reels 1 to 4. Next one final spin is launched and if you snag ‘Collect’ in reel 5 you’ll collect the pot.

There’s also a Money Collect feature with 5 different ‘collect’ symbols- Collect, Extra Collect, Multiplier Collect, Expanding Collect and Re-spin Collect. Collect symbols spin on reel 5 and you’re looking for one to land in conjunction with a money symbol to launch on of these features.