If you’ve been seeking out that elusive pot of gold at the end of the rainbow, then this super-charged slot game from Blueprint Gaming featuring the Big Time Gaming Megaways mechanic is a pretty good place to start looking!

You’d be forgiven for thinking you’d seen all the Irish-themed slots you could take, but don’t dismiss this new release from Blueprint Gaming too quickly!

Irish Riches Megaways incorporates the popular feature under license from Big Time Gaming. Now that makes things a whole lot more interesting! Megaways slots tend to be packed with features, and this one is no exception, plus you have the added excitement of there being 117,649 ways to win and the Jackpot King Deluxe!

The exciting jackpot element of this game makes it all the more attractive to slot fans as anything could happen, at any time! The ‘Jackpot King Deluxe Pot’ feature can be randomly activated in any spin. Spin the reels to collect the crowns, the more you collect, the higher the multiplier will climb, then pick from the King’s treasure to increase your prize! Enter the “Wheel King” for some massive wins and the chance to scoop the progressive jackpot!

The game offers a maximum jackpot of £250,000 or 10,000x your stake so an attractive prospect for those of you chasing the big wins.

Why not try out Irish Riches Megaways?

The familiar sounds of Irish fiddles and pipes fill your ears as you begin this charming game from Blueprint. The backdrop of the game, featuring rolling green fields and trees and the telltale lucky shamrocks, pots of gold and other icons appears on the reels. On the main opening screen, you will get a glimpse of the various features that make up the game. These include a free spins feature with an Unlimited Win Multiplier, Cascading Symbols which are triggered with every win and a Mystery Symbol which will transform all in view to the same symbol!

The colourful reels are adorned with various symbols. Each with a different value as well as a collection of coloured gemstones and letters. The pot of gold symbol is the most valuable on the reels, so that along with the feature symbols is the one to watch and wish for! The scatter appears as the diamond symbol, and the wild is a lucky horseshoe. Landing four or more scatters will start the free spins feature, with additional spins for every extra scatter you happen to spin.

You will also notice there are four barrels sitting above reels 2, 3, 4 and 5. These actually form part of the reels during the main game with the symbols changing with each spin (cascading from right to left) and therefore creating more ways to land a winning combination.

There are plenty of different features to wrap your head around in this game so here is a brief overview of the various elements that can crop up during play:

Can be triggered at any time during the main game by landing 4 Jackpot King Deluxe overlay symbols in the barrels. It is available at any stake level on all games plugged into the Jackpot King Deluxe System. If activated, spin the reels and collect crown symbols to move up the win ladder. 15 or more crown symbols activate the Wheel King section where you are invited to choose an icon to reveal one of three outcomes:

Overall Irish Riches isn’t much to look at. The theme and style is nothing new, after all, how many Irish luck-themed games have come before this one? Too many to count probably! The added attraction of the jackpot feature combined with the Big Time Gaming Megaways mechanic helps to set the game apart to make it very worthwhile having a spin. Let’s just hope that you’ll end up with a pot of gold at the end of it! 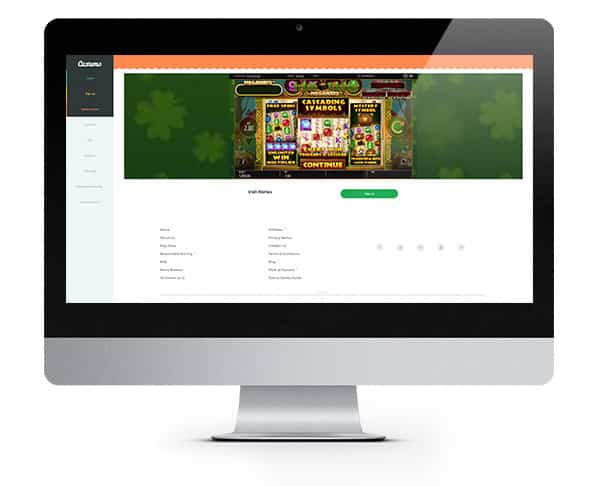