Open the book of magic and seal your fate with Golden Grimoire, this exciting new game from NetEnt full of sorcery and spells! The game transforms before your eyes and as the suspense builds so does the fun!

Golden Grimoire is a stunning new online slot game from NetEnt. The game impresses right from the opening sequence which invites you into a magical and mysterious world of spells and sorcery! It’s evident that everything has gone into this game which has so much detail in we see something new every time we play.

The low to medium volatility slot has a whole spellbook full of features to keep the gameplay moving and wins coming! NetEnt has brought everything to the table with Free Spins, Wild Substitutions, Mystery Symbol Transformation ad Sticky Mystery Symbol Transformations! Wow, you’ll need to take the time to wrap your head around all of that! Luckily we have provided a handy overview of these features to study before you play for real!

The 5×4 row, 40 payline slot game is set around a powerful looking backdrop packed with tiny little details that if you blink, will miss! The various scriptures and strange symbols will appear and disappear as soon as they come and the mysteriously magical music which has a little bit of a Harry Potter vibe adds to the fun and intrigue of this game!

As you spin the reels, the tension builds and builds! And with so many features that can potentially be triggered with every spin, there’s a lot that can happen in this game of mystery! The different symbols feature various insects holding different coloured gems as well as spades, hearts, clubs and diamonds. The insect symbols hold the most value with the spider being the highest paying in the bunch.

Other symbols to watch out for include the Mystery Symbol which appears as the spell book with a glowing question mark. This, as well as the Wild which is the skull and the, scatter which is the keyhole symbol, all help to trigger the different chain of events hopefully resulting in some nice wins! More details can be found below on each of the main feature symbols.

Golden Grimoire can be played from £0.20 a bet up to a hefty £400 a bet. The higher amount is pretty rich by our standards, but the good news is you can adjust your bet level and coin value quickly and easily using the controls below the main reels. Pick a bet size to suit your budget and also that fits with the time you have allocated to play the game. No use blowing all your cash in under a minute! 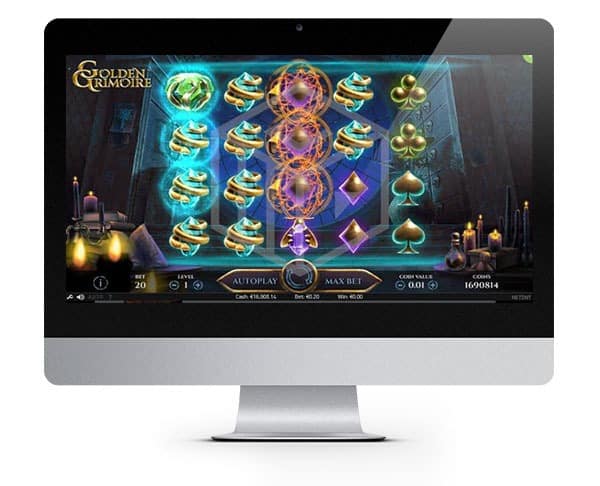 This game won’t appeal to everyone, and it’s not a game where the big wins are going to appear, but visually it’s on point an there are plenty of features to bestow smaller, frequent wins.