Slot fans better hop to it and try out the new online slot game from Push Gaming, Fire Hopper! This game is full of unexpected features including Leaping Frog Firefly symbols, instant prizes and free spins!

You can find Fire Hopper online slot at the following online casinos: 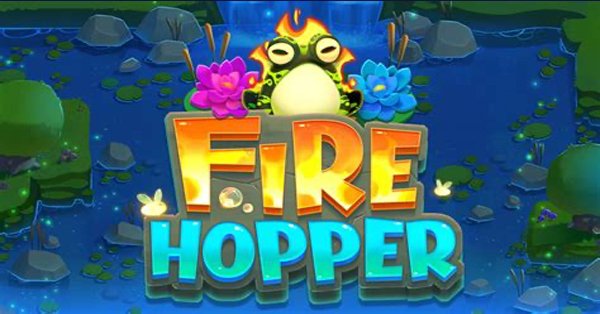 We thought we’d heard it all in the world of online slots, but a fiery amphibian themed game is a new one on us! Fire Hopper comes complete with four different features with free spins, instant prizes and more. Read our slot review to find out more about this new online slot game from Push Gaming and where to play!

Fire Hopper opens to a bright and colourful lily pond with the main features of the game highlighted including increasing multipliers, instant prizes and free spins. You can click anywhere on the screen to start the game.

The game opens to a colourful array of lily pads floating on a clear blue pond. The lily pads are set out to form the 7 x 7 grid with a mixture of pink, orange, red, green and purple flowers. The background sound effects are a peaceful mix of chirping birds and trickling water.

Below the reels, there are a few things to note before you start playing. The bet level will have defaulted to 0.50 per spin but you can adjust this to suit your budget by clicking on the arrow. This will open up the available bets that start from 0.10 up to €20 per spin.

Clicking on the spin button will cause the symbols to move downwards with a new set of symbols tumbling in from above. Any clusters of five or more matching symbols will trigger a win with winning symbols vanishing and remaining symbols tumbling down the reels with reel positions above being filled with new symbols and hopefully triggering further wins. 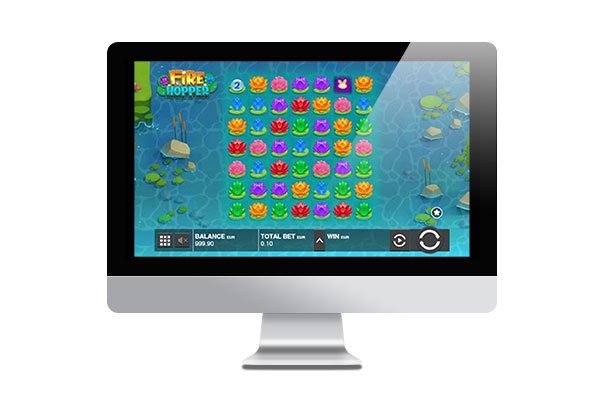 The key symbols to watch for in the game include the frog which acts as the wild symbol, the Firefly that can trigger the Leaping Frog feature, the Instant Prize symbol which can pay up to 100x your stake when the frog leaps to it plus the Bonus Firefly symbol that can trigger the Free Spins when collected by the frog.

Fire Hopper has several features including:

A Wild Frog symbol can appear anywhere on the reels in the main game and during free spins. The Wild Frog can substitute for all symbols except for the Firefly and Bonus Firefly symbols.

The Wild Frog has a starting 1x multiplier attached to it. The multiplier value increases by one with each leap the frog makes during the Leaping Frog feature.

If a Firefly symbol appears in the same round as a Frog symbol it will trigger the Leaping Frog Feature. The Firefly symbol alone has no value attached to it and cannot contribute towards a win.

The Leaping Frog feature is triggered any time a Frog symbol appears with either a Firefly, Bonus Firefly or Instant prize symbol. The Frog multiplier starts at 1x and increases by 1 with each leap. Each time the frog leaps, it will leave behind a Wild Gold Frog.

During free spins, the Frog will remain on the reels for the duration of the seven free games. The multiplier will also increase by 1 with each leap. With each new free spin, any Wild Gold Frogs will cascade off the reels.

The RTP of Fire Hopper is 96.3% which just edges it into a slightly above average game payout.

Yes, Fire Hopper has a free spins round that can be triggered by landing a Frog symbol and Bonus Firefly symbol in a spin. There are 7 free spins awarded at the start of the free spins feature.

This fun cluster wins game from Push Gaming has lots of great features to keep the gameplay moving along. That is if you can land that elusive frog along with one of the action symbols! The instant prizes will make this game all the more attractive to savvy slots fans and add to the uniqueness of the game. That said, it’s super easy to play and the colourful and simplistic design make it ideal for mobile play too.