This groundbreaking game includes four different free spins levels that you can work towards by collecting free spins keys in the unique spiral reels! Finn and the Swirly Spin is one of a kind!

Finn and the Swirly Spin ™ Overview

There is something utterly charming about this game. Maybe it’s the colourful design, lovable leprechaun or quirky features. No matter what it is that attracted us to this game, we love everything about it! Especially those cluster wins, avalanches and gamification element that are totally unique!

The Cluster Pays feature is one we have grown to know and love, and it forms part of some of NetEnt’s most popular slots including of course Aloha! Cluster Pays. It appears in Finn and the Swirly Spin, although here it looks a little different thanks to the spiral reel set up. It can help to create win after win after win, well, if you land that spiral reel just right!

Wins are created by three or more matching symbols appearing in any horizontal or vertical line. When this happens, your win is calculated, and the symbols vanish making way for the remaining symbols to move around the reels in the direction of the arrows creating further chances of another winning combination. This continues until no further winning combinations appear on the reels.

It’s not only the cluster pays that keeps things moving in this game, but there are also four randomly triggered features that can crop up in the main game! Plus those Free Spins keys that make their way to the middle of the reels and can be collected to progress through the various free spins features. You can even keep a track on your progress!

We can only hope that the luck of the Irish is on our side while playing this super fun slot game! 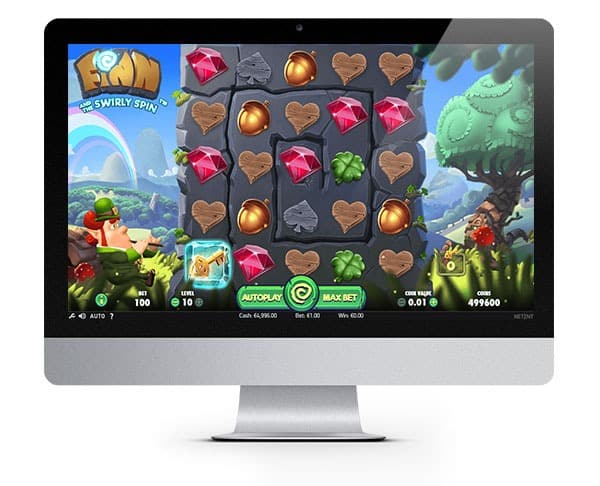 Finn and the Swirly Spinn has a leprechaun theme. Not another one, I hear you cry! Fear not, NetEnt has brought their own brand of magic to this game, and it certainly stands out. It’s like no other game we’ve seen before, and you can’t help but fall for the lucky charms of their hapless hero Finn the Leprechaun!

The animation used in the game is bright and cheery and creates a welcoming vibe to the game. The accompanying music comes care of Finn himself who is sat beside the reels happily playing his tune!

The game has an unusual set up in that the reels are displayed in a spiral format of 5 reels x 5 rows. There are 25 symbols on the reels at any one time, and as you hit spin, they will appear from the bottom left corner to fill the spiral.

The symbols feature a bunch of Irish charms and symbols of good fortune including the lucky four-leaf clover and horseshoes. The highest value symbol being the red ruby. Watch out for the free spins key symbol too!

Finn and the Swirly Spin can be played from just 10p per spin up to £200 per spin. You can alter your coin value and bet level by using the controls below the main reels.

A whole lot is going on with this game so it is well worth having a bit of a trial run before you play for real to get to know the game. Here are just some of the key features that you may encounter:

Finn and the Swirly Spin ™ Verdict

Finn and the Swirly Spin features never before seen in-built gamification that takes you and the lovable leprechaun Finn on an adventure towards free spins and hopefully a pot of gold too!

Play this slot at the following casinos: