Cosmic Eclipse it a space-themed 5-reel slot from NetEnt. The main feature of this game is centred around the black hole feature, and in fact, the main design of the board depicts a swirling black hole.

Overall the style of this slot is quite old-school and don’t expect groundbreaking graphics and sound effects as this is what we’d call a back to basics slot…simple, easy and fun!

Don’t let that put you off as there is plenty going for this game and lot’s of ways to secure yourself some decent wins, so it’s certainly not to be overlooked. 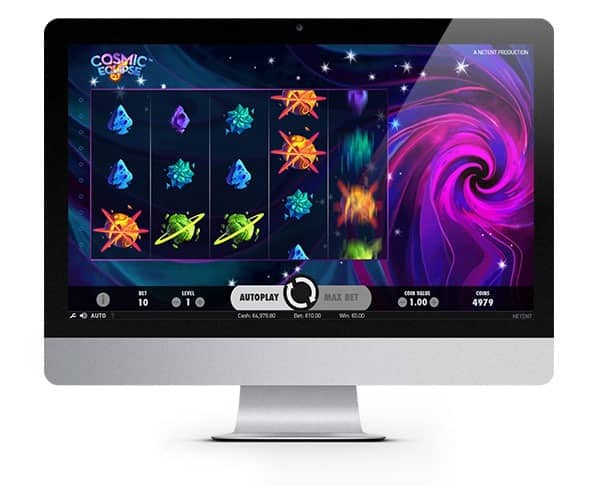 The overall design to this game is quite simple, and as we mentioned there isn’t a huge amount of wow-factor when it comes to their graphics, but overall it has its charms, and if you are into space-themed slots it delivers in that respect.

If you’re not fussy and just want a game that’s fast and fun, this would also make a wise choice as there aren’t dozens of features and controls to wrap your head around. In fact, the symbols themselves are quite simple in that they are a mix of coloured space rocks and planets each with different values attached. Overall the planets are worth more than the space rocks so are the ones to watch out for.

There are 10 paylines and wins are paid from left to right with only the highest bet line being paid out. The game also boasts a wild symbol and a bonus symbol which when appearing on reel five in the main game will trigger the Black Hole Feature.

Cosmic Eclipse has a number of game controls that you can alter to find a bet level suitable for your budget. The game can be played from Just £0.10 per spin making it one of NetEnt’s more accessible games so ideal if you just want to play without too much of a commitment. Of course, if you want to ramp it up a notch or ten, you can boost your bet size right up to £100.

Either way, find a level that suits you and stick to it. Don’t be tempted to get carried away after a few lucky spins and blow the whole lot! The controls can be toggled using the +/- buttons to change the bet level and coin value. Should you wish to mute that space-themed soundtrack, then you can also do that too.

Here is our overview of the game’s main features: 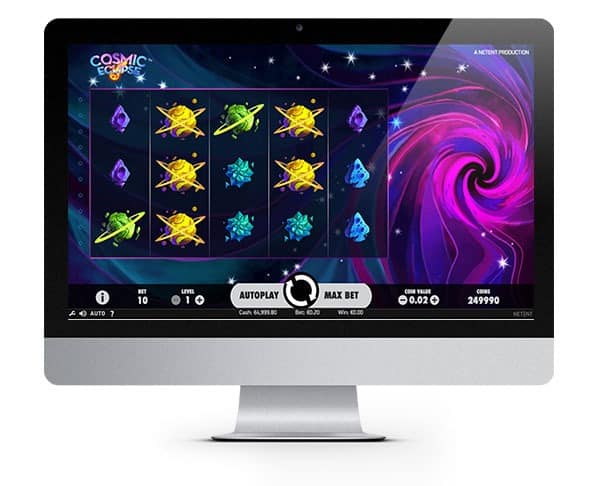 If we are honest, this game doesn’t quite live up to the reputation and standards as some of NetEnt’s bigger, more popular slots like Starburst but it does hold a firm place in our hearts. It’s so simple to play so is ideal when you just want to log in and have a spin on something straightforward without the need to wrap your head around dozens of different features and options. Sometimes simple really is best.