Dare you step into the ancient world of Coins of Egypt and explore the super features in this NetEnt slot including Pharoahs Coins and Free Spins?

Coins of Egypt brings to life the wonders of Ancient Egypt and the mysteries and treasures available are hard to resist. NetEnt as ever deliver the theme exquisitely with rich graphics that look so real, especially their opening shot of the explorer standing at the top of a set of steps that lead down into the tomb. Do you dare join him in exploring the unknown?

It’s probably one of the most popular themes for slot games, so NetEnt has worked hard to build in some exclusive features to try and stand out and overall the gameplay is fun and can prove to unearth some real-life treasures thanks to those added features and free spins! This game was exclusively developed for the Betsson group of casinos so you won’t be able to play it everywhere.

The game has been built in HTML5 so makes it ideal for playing on both desktop and mobile and has a high RTP of around 97% with 20 paylines. 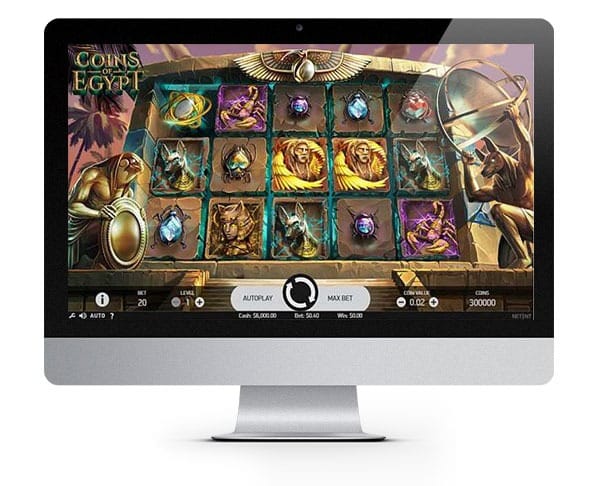 The standard 5×3 reel design has been brought to life with a dramatic tomb frame with two gods; Horus (the God of the Sky) and Anubis (God of embalming the Dead) sat either side looking somewhat menacing! Each symbol lies within a stone slab, and as you spin the reels, the slabs fall down displaying a mix of Egyptian symbols and icons.

The dramatic scenery is further enhanced by the soundtrack and effects which are of the usual Netent high standards. Upon the reels, you can spot a variety of Scarab beetles, scorpions and gods and goddesses Anubis, Wadjet, Bastet and Isis. The gods and scorpion are

among the highest paying symbols with Isis being the most valuable.

The game can be played from £0.20 per spin up to £200 per spin. You can adjust the bet level and coin value by using the +/- controls to get to a level that suits your budget and expectations. You can also set it to Autoplay which will keep playing for the preset number of rounds. Obviously, the amount you can win will relate to the size of your bet.

Coins of Egypt has a couple of features to wrap your head around. They include the Pharoah Coins feature which crops up in the main game and also the Free Spins feature. 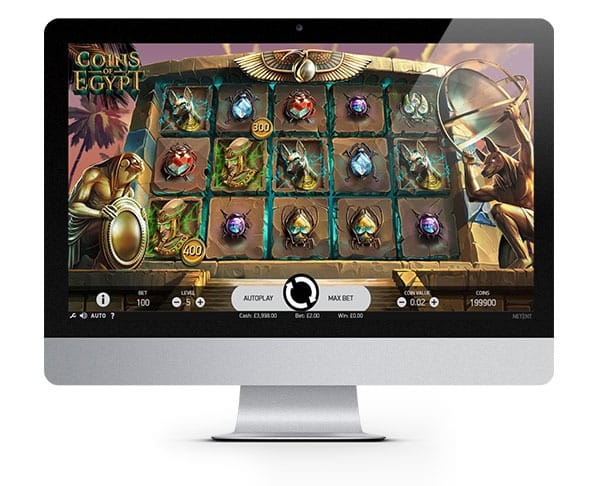 Coins of Egypt Summed Up!

You can’t help but get swept up in this game, it looks excellent and has some fantastic features to really boost your potential for a decent win. While it’s a theme we see time and time again, as ever NetEnt have put their stamp on it. Another successful slot from NetEnt!