Embark on a mythical quest in NetEnt’s Asgardian Stones! This new release landed in February 2018, and already it has made its way to the top of many ‘Most Played’ lists at the casinos where it features!

This is NetEnt at it’s best. They always outperform when it comes to dramatic games with rich graphics. No one does it better it would seem!

The fantasy game delves into the world of Nordic legend and mythology and the player is presented with a theatrical looking game board which features a series of stones adorned with striking symbols. The game features include an exciting Avalanche component as well as Colossal Crushes which crush those that appear below them! Only true warriors need apply!

Wow, the booming sound effects hit you straight away when you first open this dramatic NetEnt slot game! The reel set up is 5×3, nothing particularly different there, but take a closer look! 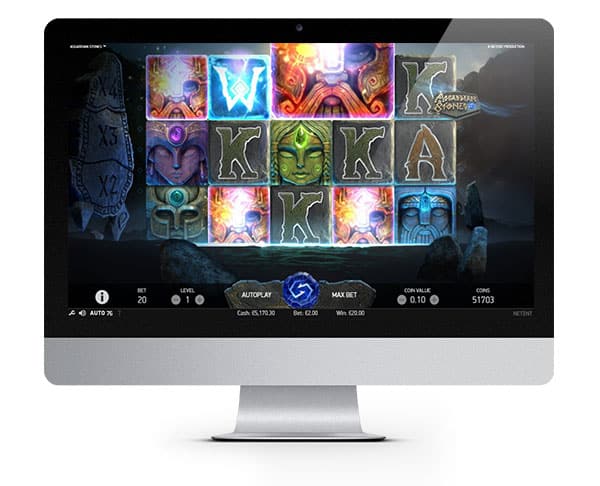 The reels are replaced by tumbling stones that fall from above each time you hit the spin icon. This exciting Avalanche feature gives you the possibility to win multiple times from each spin! Colossal symbols can appear and are either 2×2 or 3×3 which should help you create more winning combinations. Plus, there are those randomly activated Colossal Crushes which will literally smash the symbols they happen to land on top of!

Asgardian Stones is a 5 reel, 3-row slot. The game is played with 20 fixed bet lines and offers players the option to toggle their bet levels and coin values. Your predetermined levels will ultimately dictate how much you can win so think ahead of what you hope to get out of your gameplay and what you are willing to spend on it. Never go over your limits and be prepared to walk away if necessary.

Set the bet level using the ‘LEVEL’ indicator and the coin value is set using the ‘COIN VALUE’ indicator. You can bet from £0.20 up to £200 per spin.

There are stacks of features in this game (get it)! Here’s a rundown of the key features: 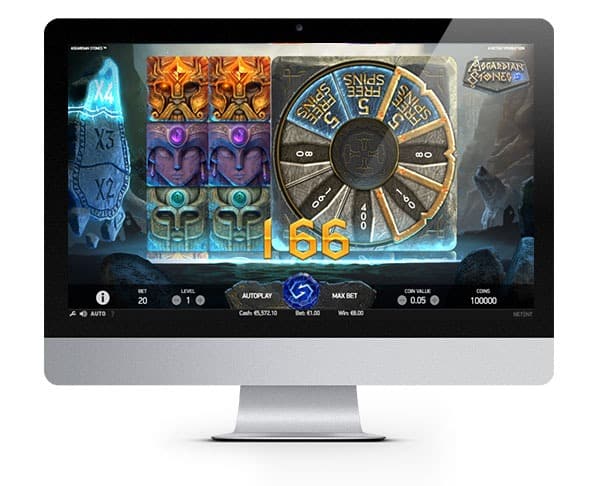 They say a rolling stone gathers no moss, but we sure hope this game from NetEnt sticks around for a while!