Artemis vs Medusa is a new slot from Quickspin. The game, which launched on the 11th August brings to life one of the most feared legends from Greek mythology, Medusa! But will you be able to beat Medusa and battle for some free spins? Find out more about this latest slot release in our review.

Play Artemis vs Medusa at the following Quickspin Casinos:

If you’d like to have a spin at Artemis vs. Medusa, we have picked out some of the best online casinos featuring Quickspin games where you can enjoy this new slot game. Check out our listings below, bag yourself a bonus or some free spins and start playing!

Quickspin has brought to life the legendary Medusa and Artemis and pared them up in the ultimate face-off of good versus evil. Ready to score yourself some free spins and take on the crazy snake lady? Then read on to discover more about this epic new slot game from igaming legends Quickspin! 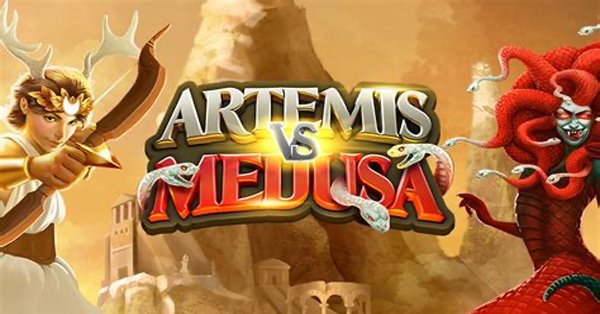 Minotaurs, griffons and more await you in the epic new slot game from Quickspin. Channel your inner Greek Goddess and behold as Artemis takes on Medusa in this ultimate fantasy slot game full of features and a battle for free spins! But will Artemis be able to slay all the monsters and bring home the big wins? Only time will tell!

The game, which is a medium volatility slot has an RTP of 96.17% and features a 5×4 reel structure. The game offers up to 1024 ways to win with a stab at 5286 ways to win in the battle free spins feature. You can hop down to our ‘Gameplay’ section below to learn more about the individual features of this game including the Unlimited Battle Free Spins.

Quickspin has delved deep into the historical accounts of Artemis wit

h plenty of iconic symbols and imagery used in the game. The battle setting is also based inside Mount Olympus during the night to add to the eerie and tense game!

What Quickspin had to say:

The heart of the game is the battlefield, we wanted to create a game that was designed to take advantage of the vertical space available in portrait mode. We also thought that it would be fun to have both the protagonist and antagonist be portrayed with a strong female character. It didn’t take us long to settle on Artemis. The goddess of the hunt was just the type of figure we had in mind. Once we had decided on Artemis it made Medusa the gorgon the most obvious choice for her opponent. 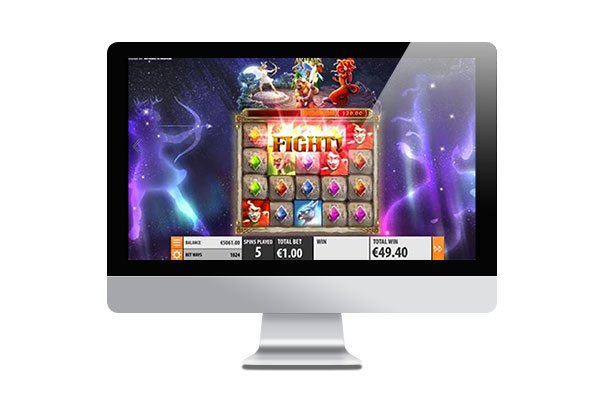 Artemis vs. Medusa throws up a number of different features and scenarios that all add to the overall dynamics and excitement of the game. While Artemis might seem like she’s got her hands full battling all of the monsters Medusa throws at her, it’s surprising how the game can turn in her favour. All of the below features certainly help things along…

During the main game, any medium value symbols can hold a Monster Bounty Coin. These link to the Bonus Bounty Feature. This is triggered by an Artemis symbol appearing with a golden frame. If this symbol lands in the last reel and there are Monster Bounty Coins visible, they will be collected and a Bounty Payout awarded.

Landing three Bonus Scatter symbols (depicted at the golden bow and arrow symbol) in the main game will trigger the Unlimited Battle Free Spins. The battle will then commence between Artemis and Medusa with the free spins continuing until the battle is over.

In the feature, you’ll do battle against not only Medusa but her minions The Harpy, Griffon and Minotaur. During the free spins, you will notice a monster meter which will appear above the reels. As you kick some serious monster-butt, you’ll rack up the corresponding symbols on the meter and move ever closer to the final battle with Medusa herself!

What is the RTP of this game?

What bonus features are available?

The game features unlimited battle free spins which continue until the end of the battle between Artemis and Medusa.

What is the minimum and maximum bet size?

Between €0.20 and €100, the default bet is set to €1. Please ensure you only gamble with funds you are comfortable with losing. There are no guaranteed wins while playing slots, the house will always have the edge. Please gamble responsibly.

As we’ve come to expect from our friends at Quickspin, Artemis vs Medusa is no ordinary slot game. The odds may seem heavily stacked in the favour of Medusa and her minions, but Artemis has a few tricks up her sleeve with some added features that create some good chances in this game culminating in the ultimate battle of free spins!

There is plenty of casinos where you can play Quickspin’s Artemis vs. Medusa along with many of their other smash hits. There are also some generous bonuses to be had, so make sure you check out our hand-picked list of the best online casinos to enjoy playing this new slot game!