No need to find a magic lamp to seek out great fortunes. Look no further than NetEnt’s Arabian Nights progressive jackpot slot!

The 10 payline progressive slot launched in October 2016 and has been gaining fans and followers ever since thanks to its eye-catching colours and charming animation inspired by Aladdin’s adventure with his magic lamp! We can only hope we get our wishes granted while playing this game as it often boasts well over a million pounds in the jackpot fund!

One lucky winner recently scooped a massive €1.4m from a €1 spin!

The Arabian/Aladdin theme of this slot is carried right throughout the game play. Starting with the game board which features 5 reels and three rows each of which is adorned with a variety of on-theme symbols. Some of these include an Arabian man holding jewel (Wild Symbol), a camel, an Arabian tent, shoes, a sword, a hat and of course the lamp (Scatter Symbol). There are also the usual letters and numbers although these have been cleverly adapted in a mosaic style to fit the theme. 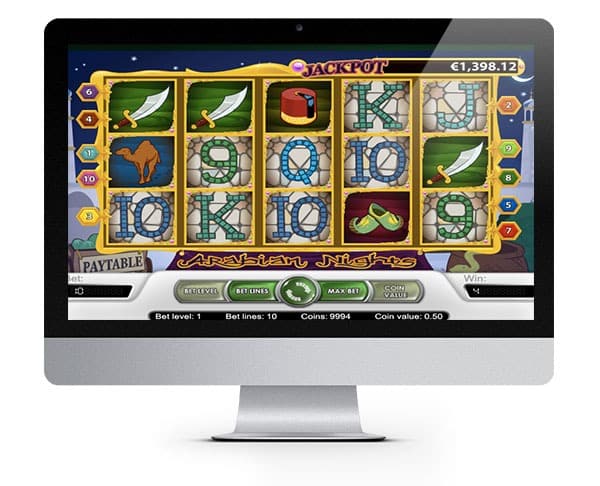 Watch out for those magic lamps as get two or more appearing anywhere on the reels and a nice little payout is coming your way! Three or more and you’ll trigger the free spins feature.

The background of the game is a little flat if we’re honest. It’s a night sky with  a few snake charmer style baskets and towers thrown in for good measure. They could have done a lot more with this but as we mentioned before the key attraction of this game is not necessarily the design but the huge jackpot waiting to drop!

The game has 10 fixed bet lines, 10 bet levels and the ability to adjust the coin value.

Set your ‘BET LEVEL’ and ‘COIN VALUE’ before you play. You can bet from between 10p and £200 per spin so establish how much you want to spend and adjust your levels accordingly to get the most out of your session.

As a jackpot slot, it’s easy to get swept up in the excitement and anticipation so always play responsibly. This game is not for the faint of heart!

Obviously, the key aspect of this game and what attracts most players is the fact that it holds the ticket to a massive win (usually well over a million pounds). For this reason, we would always approach this game with caution as it can really swallow your money quickly with not a lot to show for it at the end. The game does have a few basic features which can help serve up some wins. We have covered these in detail below: 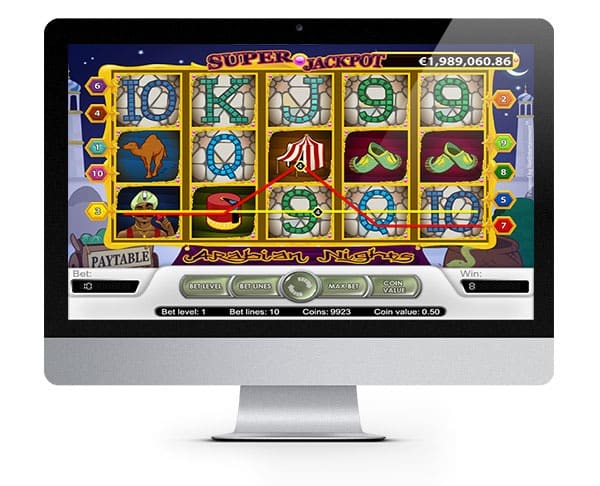 But hey, this game is all about that progressive jackpot. The jackpot pot is topped up with a portion of each bet placed. This is won if five ‘Arabian Nights’ symbols appear on a payline…we can but wish!

If we’re honest the main attraction of this game is that big old jackpot just waiting to drop, although the game does have it’s (Arabian) charms. Play cautiously with this one as you could end up spinning a whole lot of nothing. Worth a couple of hopeful spins at the end of a successful slots session though!